Join Our Tweetchat on Thursday 10/3, 12pm Pacific for a Chance to Win Prizes

But, in my mind, a higher tax bracket is a good thing. It’s not something to be avoided. Don’t get me wrong: I’m not quite crazy enough to go out of my way to pay extra taxes, but higher tax brackets are beneficial to your bottom line. Here are five reasons for that simple fact.

1. A higher tax bracket means you have more money.

Do I need to say more? Are there more people out there who think that more money is a bad thing? Our government uses the progressive tax system. That means that the first certain amount of income is not taxed, then the next is taxed at a slightly higher rate, and so on and so forth. Let me use an example with very small numbers to illustrate how a progressive tax system works. Let’s say you earn $50 and that’s taxed at a 10% rate. In this case, your after tax income is $45 because $5 was paid to Uncle Sam. Now let’s say you earn $55 and that bumps you into a 20% marginal tax rate. Yes, you are paying more in taxes now, but the first $50 is still taxed at 10%. It’s only the earnings from $50 on that gets taxed at the higher rate. In our example, You still get the $45 from your first $50 of earnings, plus $4 from the $5 of additional earnings, a total of $54.

In the United States, the higher before tax earnings you make, the more money you can expect in your pocket at the end of the day. 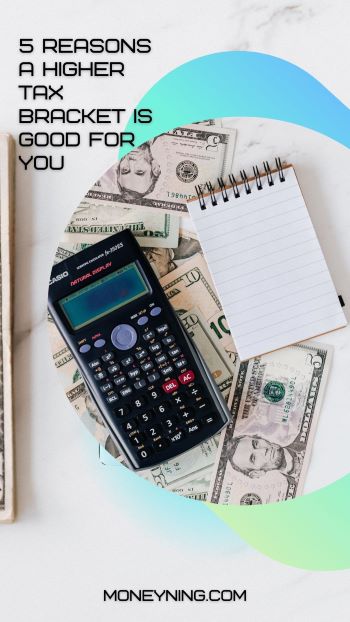 The average taxpayer isn’t in a position to write off a whole lot on her taxes, which is one of the reasons why the IRS offers the standard deduction. Without the provision, many people would wind up with a higher tax bill. But when you’re earning more money, your deductions, added together, can exceed the standard deduction. For one, many high income earners pay a hefty state tax bill, which is deductible on the Federal tax return.

Many high income earners are also business owners. When you run a business, plenty of business deductions open up. For example, business meals with clients are 50% deductible. While you can’t deduct the expense if you just go out to eat with friends, you certainly saved money if you went out for lunch with a business client since you likely won’t need to eat a second time that afternoon.

3. A higher tax bracket means you can save more.

There are a lot of ways to bring down your tax bill and many of them are good for your overall financial situation. More money means that you are in a position to put away the extra in tax-advantaged accounts for your retirement or your child’s education or for medical expenses, reducing your tax bill. Sure, you may hit limits on certain savings plans, but you probably make quite a bit of money already if you are worried about hitting limits.

4. A higher tax bracket means you can afford a better accountant.

There are plenty of ways to keep your tax bills down, although they require someone very familiar with the tax law. It may not be a bad idea to see a financial planner, as well, but if your only goal is to keep your money out of the hands of the government, an accountant can provide plenty of options.

However, these professionals need to make a living and they can charge quite a good sum for their services. High earners can justify this expense because the same deduction is worth more to them. When you aren’t in a high tax bracket, the deductions an accountant might uncover for you may not save you as much as the fees that are charged. The good news is that you can read up on them yourself no matter how much you make, but having a professional does make things easier.

5. A higher tax bracket means you have more freedom.

If you’re earning enough money that your taxes really are growing by leaps and bounds, you’ve got many options. I wouldn’t suggest moving abroad to somewhere that doesn’t even have taxes, personally, but you can take steps to invest your money and make it grow in such a way that the IRS won’t touch it. You can spend it on purchases that are tax deductible (fixing up your home so it’s more eco-friendly can put you in the way of a few tax breaks). You can donate a big chunk of change to charity. You can even pay your taxes willingly and then go out and spend your money however you like. Earning more money is a fast way to buy yourself some freedom, even if you have to send the IRS a check first.

I know there are plenty of people who look at taxes as one of the biggest burdens of their lives, but if you can change the way you look at your taxes, you’ll eliminate a lot of stress from your life. While I wouldn’t go so far as to say that paying taxes is a badge of honor, I do keep in mind that the money is going to a good cause and that I benefit directly from it. Our tax dollars pay for roads, schools, police forces, and far more, along with helping out people who can’t afford that higher tax bracket. There’s waste in the system, but I like to think that the country is still a lot better with our tax dollars than without.

Don’t be scared of a higher tax bracket, if only because it means that you’re earning more money overall. There are plenty of ways to keep your tax bills to a minimum, but they require you to earn money in the first place. Rather than being afraid of a higher tax bracket, it’s better to be afraid that you’ll wind up in a place where your income is so low you don’t have to pay taxes.