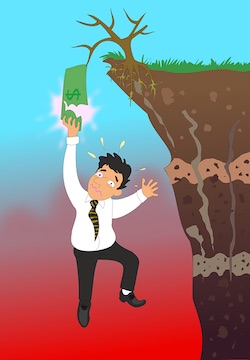 There’s a lot to be said for paying off your debt and living debt free. After all, it’s tempting to try to pay it off as quickly as possible whenever you look at that balance. This impulse is often encouraged by stories of consumers who made heroic efforts to pay down debt in a short amount of time.

But should you really work hard to pay off all of your debt right now?

It’s true that you can make big sacrifices, look for extra income, and pay off your debt in record time. But is it always the best route? And what happens when you are done paying off the debt. Will you stay debt free?

While you can definitely be successful taking an aggressive approach to debt reduction, it’s also important to consider whether it’s the best approach for your situation. Is it possible that you might be better off overall by taking it a little slower?

Paying Down Debt and Extreme Dieting

My weight used to yo-yo (but continue to move ever-higher) because I’d tackle those 10 or 15 pounds aggressively to reach a desired target. I’d spend six to eight weeks depriving myself and exercising more than usual. Once I hit that target, I’d slowly return to old habits. That’s because of the dramatic changes in my eating and exercise habits were unsustainable.

The same might be true of your finances. You can deprive yourself of everything you like to spend money on for a short period of time, but are you really tackling the root of the problem? My cyclical weight gain wasn’t my problem — it was a symptom of my lack of good habits. You might fall into the same trap when you pay down debt very quickly.

Are you really changing your habits, or going through temporary pain to hit a goal? The Bankruptcy Data Project at Harvard found that about one-third of those who file for bankruptcy wind up in the same place later. This can also happen when you pay off debt very quickly without truly changing your approach.

Once I stopped crash dieting, I started making smaller, more sustainable changes. It took longer to reach my goal weight, but it was easier to maintain that weight once I reached it. Incremental changes to my nutrition and exercise habits stuck. The same approach can work when it comes to debt. Focus on changing your money habits in ways that you can maintain for the long haul. Then tackle your debt.

Another consideration is the need to be ready for the unexpected. When my then-husband and I were first married, we tried demolishing our debt in one big payment, draining our savings. Unfortunately, a rash of unexpected repairs and similar expenses cropped up almost immediately after making that payment. And since we didn’t have any savings because we used the funds to pay off our debt, we had to turn to credit cards. In no time, we were right back where we started.

Don’t forget to shore up your finances even as you pay down debt. You might pay more interest right now, but you could save in the long run if you can manage matters so that you don’t wind up back in debt.

The type of debt you carry should dictate whether you should pay it off as soon as possible too. 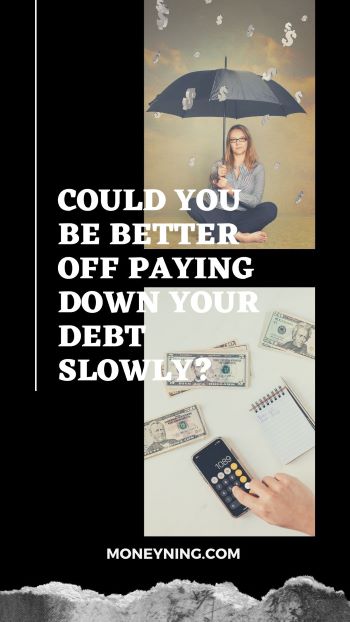 Many of us routinely lump all debt together and call it “bad.” And while there is an argument that there’s no such thing as good debt, the truth is that some debt is worse than other debt.

High interest consumer debt is the worst type of debt. This is money owed on things that we consume — things that don’t retain value and don’t provide the hope of income or some type of solid return later. Not only do you pay for something that won’t have the same value a year from now (or that might be totally gone a year from now), but you also pay a high rate of interest on it.

Credit cards are a good example of this since credit card debt often (but not always) results from purchases made for consumer items like clothes and electronics. High interest consumer debt doesn’t offer you the chance to build assets, and you almost definitely won’t receive any sort of return; you’ll just be paying high interest charges into someone else’s pocket.

Other types of debt aren’t quite so terrible. While student loan debt can keep you down, it isn’t the worst thing out there. In fact, when used carefully and judiciously, student loans can help you get the education and skills you need to boost your earning power over time. Student loans often come with lower interest rates than consumer loans, which means you pay less for the privilege of borrowing.

And who could forget about mortgages? With rates at historic lows, there’s a case to be made for using the funds to invest for the long term. The same goes for using business loans to fund a venture. You can see a return if you play your cards right, but you have to be careful not to get carried away to the point that your low interest debt turns into a burden, rather than a benefit.

Choosing to Put Off Paying a Debt

Not too long ago, my mom asked me why I wasn’t putting as much as I possibly could toward my student loan debt. My answer was this: the fixed interest rate on my student loans is below 2%. I’ve been able to manage better returns than that on my investments. My annualized returns on my conservative retirement account have even beat that — recession and all.

From my small P2P loan portfolio to my taxable account to my Roth IRA, my money is better used earning an annualized return of 5.5% to 7% (depending on the account) than it is paying down a debt that isn’t even costing me 2%.

At least that’s my opinion.

At some point, especially if my income is much higher that a bit of excess return won’t benefit me as much, I might consider tackling the student loan debt a little more aggressively. But for now, it doesn’t make a lot of sense to me.

Some debts are a little more urgent than others. You’re probably not going to earn 18.99% on your investments, so paying down credit card debt makes sense. But if you have low interest, non-consumer debt, you might think twice before retiring it, especially if you might instead pay down your low interest debt only to turn to high interest ones in a pinch.

What do you think? Should all debt be paid off immediately? Or are some debts worth waiting on?