What is Real Estate Syndication?

We all make money mistakes, but some bad financial moves seem to be more characteristic of women. I’m sure there are plenty of male-specific money mistakes too, but as a woman, I can probably write better about my own gender.  So here they are – money mistakes that women tend to make.

Spending Too Much On Clothes and Shoes

If you’ve read my previous posts on this blog, you already know I believe that Women Should Save More, and Spend Less on Designer Shoes. It’s not that looking good or being fashionable are not important – it’s just that it’s absolutely possible to look great on a budget, and buying into the “you must spend ridiculous amounts of money on clothes or you won’t get a promotion” theory is, in my opinion, a big mistake.

Seriously, the only people who benefit from the “two months’ salary” rule are the people in the diamond and jewelry industries. It’s a stupid rule that begs to be broken. Who in their right mind would spend 2 months’ salary on a ring? If you’re financially well off, own your house, have a big emergency fund and nice size nest egg, great – by all means spend as much as you want on a ring. But for the average couple, taking such a huge chunk of money and putting it into something that is likely going to depreciate, instead of putting it in an emergency fund or as a down payment on a house, just doesn’t make sense. And buying that ring with credit is even worse.

I’m including this in the list even though men fall for it too, because I believe that women compete on different things than men. Men probably compete more than anything else on the cars they drive, but women focus more on the house. Both are of course mistakes, and both are very human – but it’s good to be aware of our tendency to spend more just to keep up with the Joneses and avoid it when possible. 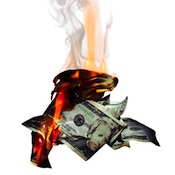 Engaging in Recreational Shopping and in “Retail Therapy”

Extremely common among women, these behaviors are destructive and can burn serious amounts of money in a short time, or – worse – get women into debt. Have you seen the movie Confessions of a Shopaholic? It’s not a very good movie, but it’s entertaining and it really captures the pleasure that shopping can bring, and the deep trouble it can cause. I’ve recently read that many women have clothes in their closets that still have tags attached, and that many of them hide purchases from their husbands. That’s insane!

Relying on Marriage to Save Them

You can’t build a huge debt, consistently spend more than you earn, and tell yourself that it will all work out once you get married. What if you never get married? What if you fall in love with a poor man? What if he ends up leaving you and stops supporting you financially? Do you really want to be dependent on another person for your survival? Women in the past were completely dependent on their fathers, then on their husbands. We’ve worked hard to free ourselves and become financially independent. Do you really want to rely on another person to save you from your own mistakes? If you’re an adult, you should be able to take care of yourself, and that includes handling your finances – responsibly.

This is a tough one. It’s been shown in research after research: women ask for less than men at work. Naturally, they end up getting less. They’re also less assertive when it comes to asking for promotions and raises. We, women, tend to be less confident, and we feel that we must play nice. The problem? There are other studies that show coworkers and employers indeed expect women to play nice, and that assertive behavior is seen as unattractive and a turnoff when a woman displays it, but not so when displayed by a man.

So what is a woman to do? It’s hard to say for sure, but if you can manage to ask for more – nicely – I guess that would be the way to go. Personally, I find this need to walk a fine line between getting what you want while keeping your “femininity” and demanding it like a man infuriating. If I want a raise, why can’t I just go to my boss and tell them “I don’t make enough money to properly take care of my family and I need a raise?”

In addition, there’s also the notion that unfortunately many women and their employers share: that a woman is a secondary provider and so her income is less important. This couldn’t be further from the truth, especially in turbulent financial times – a family where both partners are good earners is much less at risk of losing everything if one of the partners loses their job.

I’ve personally made this easy mistake. Since I work from home and my income is significantly lower than my husband’s, for several years I only carried the bare minimum of life insurance on myself. Many stay-at-home moms are in a similar situation — thinking that life insurance is all about replacing lost income.

Not only does that overlook all of the work that a stay-at-home spouse takes care of — which would have to be paid for if she were no longer there – it also ignores the fact that a family would need a financial cushion to allow everyone to overcome their grief.

If the unthinkable happened, your kids would need more attention and care from your spouse, and being under-insured means he would have to continue working at the same (or higher) level just to maintain your standard of living. Life insurance is about more than just replacing income; it’s also about providing breathing room for a family in crisis.

Thinking They Don’t Know Anything About Money

Women are socialized to defer to others when it comes to subjects they aren’t knowledgeable about. (And in many cases, women will politely listen and defer to those who actually know less than they do, for fear of coming across as overbearing.) Between that deeply-ingrained socialization and the fear of doing or saying something stupid, women will often allow others, particularly the men in their lives, to make important financial decisions because they feel like they don’t know enough.

Here’s the thing: Suze Orman and Warren Buffett were both once ignorant beginners, as well. It’s much savvier to learn about your financial options and ask the stupid questions, rather than allow someone else to make decisions without your input. Remember that a question is only truly stupid if you never ask it.

I think of this as “‘The Giving Tree’ effect,” named after the famous children’s book by Shel Silverstein — in which the tree gives and gives to the boy she loves until nothing is left of her but a stump.

Mothers, in particular, can easily fall into this trap, because it can be so hard to watch one’s children struggle financially. But women have also been known to give money they can’t afford to lose to boyfriends, friends, parents, and siblings because they want to make the other person happy.

We all want to feel generous and make the lives of our loved ones easier. But just as there’s a reason for putting on your own oxygen mask on a plane prior to helping your children, you have to remember that you’re not truly helping anyone if you yourself can’t survive because of your giving.

Set up boundaries for yourself, and enforce them. Money and emotion may be closely tied, but there’s no need for anyone to guilt you into giving money when you don’t want or can’t afford to.

Over to you now. Do you agree – or disagree – with my points? And what about men? Do you feel that men shortchange themselves just as much, only in different ways?