Many people have likely asked, “How Can I Get Rich?”, but how many of them have asked Alexa?

I did exactly that recently, and her answer blew me away.

Turns out Alexa is a personal finance whiz, and her advice was as solid as anything I’ve read over the past decade.  It was so good, I’ve decided to share it with you today, along with my comments on her advice.

Prepare to be amazed. 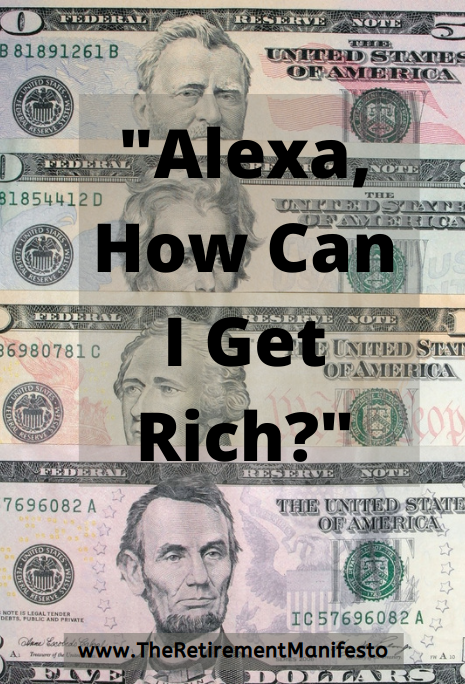 From time to time I like to test Alexa’s knowledge, and the question “How Can I Get Rich?” came to my mind as an interesting “Alexa experiment”.  She usually disappoints, but for this one, she was on her game.

She gave the best response to any question I’ve ever asked her.

I listened to her 1 minute, 40-second response, and asked her the same question again.  Then, I asked it a third time after hitting “record” on my phone.  I simply “had” to capture it, and there was too much to capture as she talked.

Recording Alexa?!  Yes, her response was THAT good.

Here’s how Alexa answered when I asked her How Can I Get Rich? I was blown away by her response. Click To Tweet

Alexa Answers The Question:  How Can I Get Rich?

To simplify this post, I’ll cite every piece of Alexa’s answer to “How Can I Get Rich?” in sentence format, followed by my thoughts on each of her statements.  To hear the entire answer, you’ll have to ask her yourself.  With that, here we go with a chronological summary of her response:

“There is no one guaranteed way to become rich”

I like that she started with a simple disclaimer.  No “Get Rich Quick” schemes here.  Little did I know that she was only setting the stage for an in-depth summary of the keys to building wealth.  ‘Atta girl, Alexa.

Ah, the three levers of wealth:  Maximize Earnings, Minimize Spending and Invest wisely.  It would seem that Alexa read Part I of my Building Blocks Series:  The Levers of Wealth.  I’m honored.

“Becoming wealthy starts by earning good money.  You can do this in many ways: going to school, getting a higher education and joining a high paying profession, working your way up in a professional trade, or launching a successful small business, among other things.”

Ah, I see what she’s doing.  After introducing the 3 Levers of Wealth, she’s going to give us a few tips on each one.  Alexa’s got this answer organized, and her tips are spot on.  I really like that she included “a professional trade” in her response, it’s a path too often overlooked in our culture.  Mike Rowe would be proud.

Ok, moving on to Lever 2.  Don’t spend more than you earn (which is, by definition, what debt really is).  She’s even smart enough to know that it’s wise to pay down your high-interest rate as soon as you can.  Yep, she’s got this personal finance stuff figured out.

“As you build your income, focus on saving money by living within your means, spending your money carefully, and saving as much as you can.”

As my Dad once told me, it’s simple (though not easy) to become wealthy, just spend less than you make and do it for a long time.  Wise man, my Dad.  Glad I followed his advice.  As a lifelong teacher, he must have taught Alexa a few things along the way.  Who knew?

“Put a portion of your income into savings and investments before spending it on other things.  A 401(k), IRA or other tax-advantaged plans are also a good way to earn long term wealth, especially if your employer offers matching contributions.”

Sounds like “pay yourself first”, or “automate your savings”, both solid suggestions.  Even better, she’s aware of the benefits of tax-advantaged plans and the value of getting that “free money” from your employer.

“Make the most of your investments by investing in broad-based low fee funds, like S&P 500 index funds or targeted retirement funds that invest in a broad portfolio and adjust the balance of stocks and bonds over time to maximize returns while you’re young and protect your assets as you get older.”

I’m falling in love with Alexa, we have so much in common.  Turns out she’s a mutual fund fan, just like me!  Nothing better than those broad-based low fee funds for the majority of your savings.  Not too many robots I know who are aware of the value of low fee funds!  She even mentioned rebalancing.  I think I’m in love…

“While there’s no guarantee that any path will make you wealthy, by following these steps you’ll be in the best a good position to be rich and gain financial independence.”

They must have attorneys over there at Alexa-land.  Gotta end up with a disclaimer to avoid being sued.  🙂

And…did she really say Financial Independence!  Wow, Alexa almost stepped into the FIRE community with that response.  She should have made it official and added the “Retire Early”.  Ah well, it’s the only obvious mistake in her amazing response.  I know she’s only been working for a few years now, but if she follows her own advice it won’t be long until she’s able to retire.  I wonder what HER savings rate is?

If anyone argues that understanding personal finance is difficult, just point them to Alexa.  In less than 2 minutes, she provided one of the most concise, yet comprehensive answers to the question of “How can I get rich?”  If Alexa can learn this stuff, anyone can.

Now, it’s a matter of doing it.  I wonder what advice Alexa can give on actually implementing these lessons?  I may just have to ask her…

Your Turn: Are you impressed with Alexa’s answer to “How Can I Get Rich?”?   What’d she miss?  Is getting rich really as easy as she makes it seem?