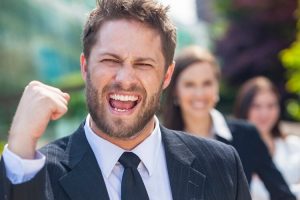 Last time we started a series of posts on my retirement.

If you missed that and want to read it, check out I Retired!

Let’s pick up where we left off.

Our business was “ok” but not great.

Then the perfect storm hit.

Our first quarter had been propped up by a seasonal selling event where customers had to buy from us. The second quarter had no such benefit. As such, our sales dropped dramatically.

Add to this that my boss was out of the office most of April and May, leaving me in charge completely. And this is when the floor fell out of the business.

Remember, I had asked him to let me run things. He did (he was gone) and everything went into the toilet.

That said, we had also launched a MAJOR product with doubtful consumer interest (which was decided before I arrived) and we had moved out of a good selling season.

As you may have guessed, our profitability dropped. We were still ahead of plan for the year but had given up most of the ground we made in the first quarter.

When my boss returned to work in mid-May, he exploded on me like I have never seen in almost three decades of business. While he held himself out to be a very ethical, fair, and kind man, he did not treat me in any manner like that over an hour-and-a-half-meeting. I’ve worked for some cut-throat companies and executives in my day, many of whom would not claim to be ethically motivated in any way, and none of them talked to me the way he did. And yet he held himself out to be an ethical man.

He went into a tirade about the business and did it in a demeaning manner. Or at least he tried to be demeaning. I didn’t just take his diatribe — I gave it back to him. I told him honestly what I thought whenever he launched into a topic. Of course, he didn’t want to hear this as some of it had to do with him. And of course he couldn’t be responsible for poor business results — though he had been in charge all the previous years and that’s what we were trying to recover from.

My defense of my long-term plans and my people made him even madder. Ultimately he asked how I thought we were doing and what we should do. I said we had our challenges but we were still ahead on income and that we couldn’t fix a business this troubled overnight. We needed time. He said he wasn’t sure we had time and he didn’t believe in the plan.

He also asked me if this job was my life or not. Asked if I was committed to it.

This was a difficult question to answer because while I was committed to doing a good job, the company was certainly not my life. And I never said it was or pretended it was. My life outside of work was way more important than work.

I gave him some sort of half-hearted reply that made him even madder.

Let’s pause a bit here for the other side of the story: my boss’s point of view.

He had hired a new manager and there were problems with the business. Of course these problems weren’t new and could have been caused by the bad product the company was forced to launch, but most people are not able (or willing) to take responsibility for the results they have generated. So it had to be my fault, right?

Ok, so even if it was my fault, the way to approach it is to sit down with an employee and decide together what can be done. What are the problems and what steps can we take to address them? It’s the two of us working as a team to fix the issues. Especially since we were still on our profit plan. This is how I’ve handled problems in the past, had other bosses handle problems with me, and what I would expect from any professional business person.

But he did not approach it like that. He took zero personal responsibility, blamed me, and acted more like a spoiled brat who had his candy taken away than the head of a company.

It was this meeting, in mid-May, where I decided I was out of there. This was the last straw. The micro-managing, focusing on non-priorities, and making key decisions against my advice were cause enough, but this past episode put the situation over the top.

I didn’t know when I was leaving but I was leaving and it was going to be sooner rather than later. I had lost all respect for him and had more respect for myself than to stay around much longer. It especially burned me that he played Dr. Jekyll to the employees but was Mr. Hyde to me.

It was at this time that I began to seriously consider my retirement numbers. I looked at my income as well as developed monthly budgets for the next year and a half. I also projected out a few decades — listing expenses, income, when funds would become available, etc.

This is when I really realized that I had enough. In fact, I had more than enough. Time will tell but it looked like the income I already generated from assets would cover my retirement budget — without drawing from my assets. In a worst-case scenario, I could withdraw a minimal amount of savings each year but even then I could live for 100 years or more on what I had.

At the same time I started wrestling with some non-work issues that moved me closer to retirement:

So it was settled. I wanted to retire as soon as possible, but the question was when to do it.

To find out what happens next, see My Retirement Story, Part 3.

How to Invest in Bitcoin: A Crash Course in Cryptocurrency

How to Invest in Bitcoin: A Crash Course in Cryptocurrency

With all of the different headlines, click bait, and hype ...