Getting Your Spouse On Board with Early Retirement

“I’m a HITBLIT”, Charles Barkley, in the waning days of his NBA career, told his interviewer.

“A HITBLIT?” the reporter asked.

“Yes, that stands for had it. . . but lost it“, the aging Round Mound of Rebound explained with a laugh.

Having it and losing it seems to be heavy on the minds of many near-retirees who see record equity prices and who have lived long enough to know that bull markets don’t last forever. They can end very badly. Severe bear markets near a retirement date can delay retirement plans and even permanently lower a standard of living in retirement.

Robert Powell recently wrote at The Street[1] regarding a subscriber who asked, “What is the best thing to do with a 401(k) if the market keeps crashing or we go into another recession when I only have a few more years to go before retiring? I need to minimize losses at this point.“

Two things we can be relatively sure about are that the market will keep crashing and that there will be another recession. Bear markets often overlap with recessions but not always, as the following chart from Capital Economics[4] shows. 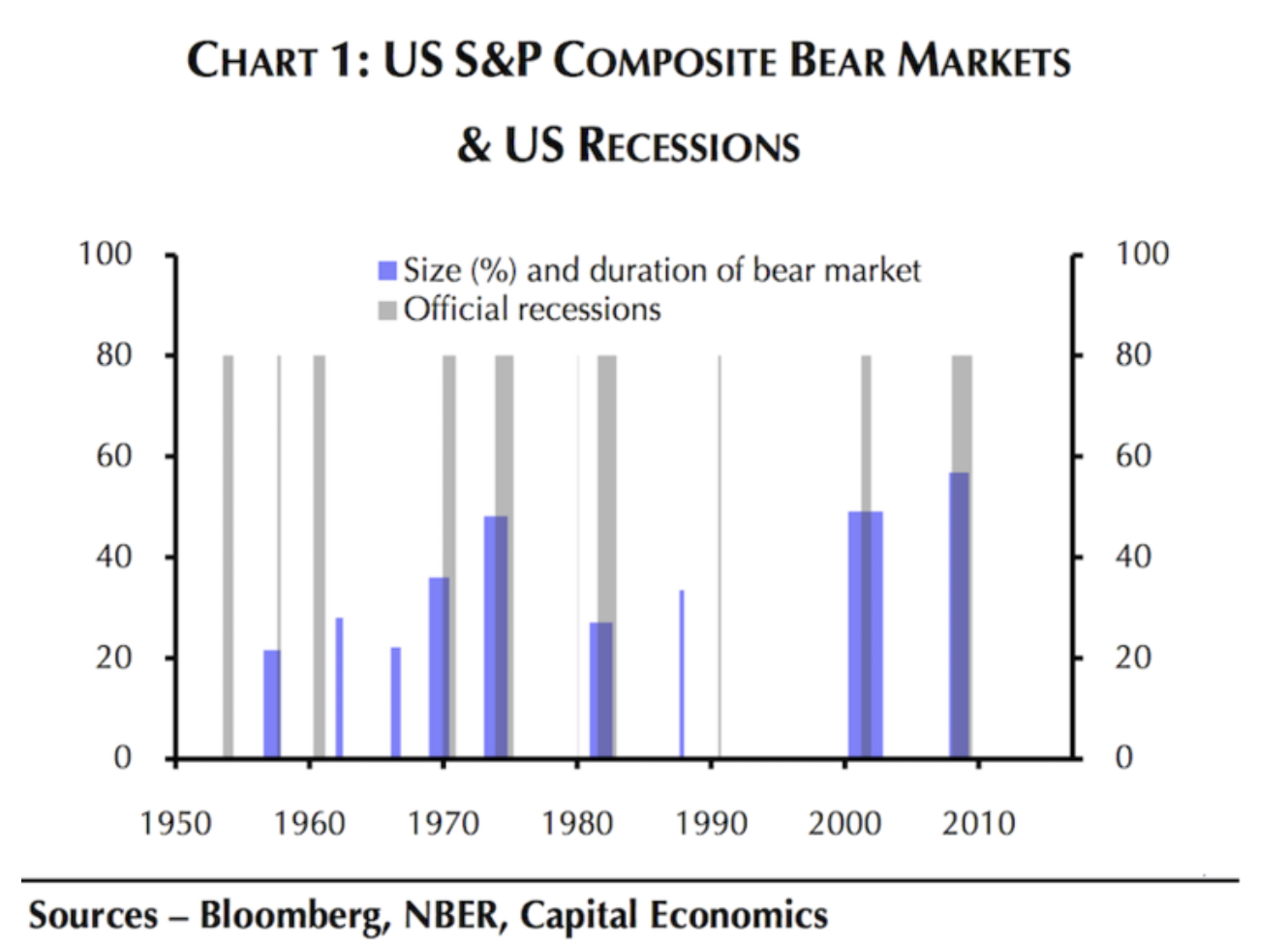 Powell responded to the question with answers from a number of retirement advisers (including yours truly). It’s a nice piece and you can read it at the link below but I can distill the essence of the advice.

Don’t gamble more than you can afford to lose.

“Once you win the game, stop playing”, William Bernstein advised about saving for retirement. I don’t believe, as some have suggested, that he means that you should stop investing in stocks once you’ve funded retirement. I think he’s making a more subtle point about utility, a measure of the satisfaction we receive from consuming goods and services.

There is a similar utility issue when we consider how much to invest in the stock market as we approach retirement because investing more means we might earn more but also that we might lose precious capital. For most of us, losing capital after we have “won the game” would generate a lot more pain than increasing our savings by that same amount would generate happiness.

Earlier in our careers, the scenario is reversed. We don’t have much financial capital to lose and we have decades to make up for any losses. We have lots of “human capital”, the ability to earn money from our labor. The losses are less painful because we expect to win in the long run and we don’t need the money for decades. We can better afford losses because we have lots of two key ingredients: time and the ability to work. Both diminish with age.

The solution is to gradually shift the game away from growth of capital and toward preservation of capital, though not entirely. We’ll probably still need some growth. After decades of saving for retirement, many of us have difficulty making that shift from accumulation to spending. It’s a different game.

Sadly, I have much more experience with HITBLITS than most. During the Tech Crash, I personally knew dozens of 20- and 30-somethings who had amassed 5 or 10 millions dollars or more in tech stock options but refused to sell them and rode them all the way back to zero. It happened quickly. From zero to millions to HITBLIT in about ten years. The crash was over in months.

A close friend in his early 60s sat atop $4M of vested MCI stock options only to see his boss, Bernie Ebbers, convicted of the largest accounting fraud in U.S. history, at least until a different Bernie stole that record. At least the 30-somethings had a few decades to recover, though they were very unlikely to see such wealth again as they once had. My friend had a handful of working years left and a bankrupt employer.

Just after the Great Recession, the national press was replete with stories of near-retirees who were looking at postponing retirement for years in hopes of getting back to where they were in early 2007 with no certainty of ever reattaining that level of wealth. They had simply had too much equity exposure.

These experiences probably left me with a different perspective than most have regarding the need to protect your savings when you have little time left to recover from losing them.

Why not just accept bear market losses with the confidence that a higher equity allocation will help you recover quickly? That works fine in early stages of the accumulation phase but the calculus is quite different as one approaches retirement.

Younger households still have careers that let them buy more equities at bargain prices after a crash. As a result, their portfolios will recover even faster than the market. Near-retirees, on the other hand, have far less time to recover and most of their wealth growth comes from their base of capital and not new savings.

Not long ago, a reader pointed out to me that when dividends are included, the U.S. market recovered from the Great Depression relatively quickly. There are some markets that have never recovered, though, and Japan’s recovery has exceeded 20 years and counting.

But, my reply to the reader was “you are not that guy.” Someone beginning a career right after the Great Depression would probably have had little to lose in the market crash but years to work and save money to invest in a recovering market. By investing periodically in stocks, his portfolio would have grown even faster than the market.

For someone retiring around the time of the Great Depression, however, the crash would have devastated her savings just when she needed to begin spending them. Instead of adding new investments like the early-career guy, she would be spending from a depleted portfolio. Her portfolio would recover much more slowly than the market and, in fact, would likely never recover. Large market losses in our youth are far less dangerous than losses when we approach retirement.

I often receive comments saying something like, “but the market recovered in just 5 years after the Great Recession!” True, but if you were paying bills for those 5 years by selling investments, your portfolio didn’t.

I think anxiety is an excellent metric for asset allocation. Bernstein agrees. In The Intelligent Asset Allocator[2], he recommends first allocating one’s portfolio between stocks and bonds based on the greatest bear market loss we believe we could stomach without being tempted to bail out at market-bottom prices.

There are other factors to consider beyond the equity allocation of our portfolio, including total wealth and our floor of safe (not market-based) investments.

Very wealthy households may spend only a small percentage from their portfolios each year. They can afford to take more equity risk with limited risk to their standard of living. They have the luxury of riding out market declines and waiting for the recovery. If you only spend a percent or so of your investment portfolio each year, a bear market shouldn’t bring on an anxiety attack.

Households without large savings but with significant safe income from Social Security benefits, annuities and pensions also have a more secure standard of living. I’ve helped clients whose safe income could completely cover their standard of living. They, too, have the luxury of riding out market declines and waiting for the recovery.

Retirees and near-retirees who lose sleep over the next bear market are likely to be largely dependent upon market returns to fund their desired standard of living. The problem may not be their portfolio’s exposure to equity risk but a lack of income from non-market sources.

For these households, purchasing annuities can ensure more of their standard of living and allow them to take more risk — and potentially enjoy more gains — with a smaller equity portfolio.

Sleep loss and anxiety attacks aren’t the only symptoms of a retirement plan that might not be right for you. Frequently checking your portfolio balance or regularly checking market levels can also be a red flag.

I check my portfolio balance (or more often my net worth) once or twice a year. I have felt the need to rebalance perhaps three times in thirteen years of retirement. Admittedly, I check more often in a severe bear market (I’m not immune to anxiety) and I suspect most retirees check more frequently than I do. Nonetheless, if you feel the need to check on your stocks more than monthly (or anxiously await your daily dose of Mad Money), it’s probably worthwhile asking yourself why.

If your current retirement plan has you on edge like The Street subscriber, then your concern is likely more about losing your standard of living than seeing your savings balance abruptly (and hopefully temporarily) decline. Maybe you have too much equity exposure for your risk tolerance and risk capacity but maybe your plan is too dependent on market returns.

One of my favorite quotes about retirement planning is a comment from Michael Finke to financial advisors:

“Your goal is to make [clients] as happy as they can be in retirement and it may make them happier to have less anxiety about their investment portfolio.[3]

If your retirement plan makes you overly anxious about bear markets, maybe you need a plan that makes you happier.

[1] What to Do With Your Retirement Portfolio in This Volatile Market, The Street.

[3] What Makes Us Happy, The Retirement Cafe.