Ten Tips to Make the Most from Your Retirement

Annuities are insurance contracts that you can purchase to provide a stream of income for as long as you live. Think of them as life insurance in reverse. With life insurance, you pay premiums periodically while you are alive and your beneficiaries receive a large lump-sum payment when you die. Annuities are just the opposite — you pay a large lump sum to the insurance company up front and they make periodic payouts to you until you die, no matter how long that might be. 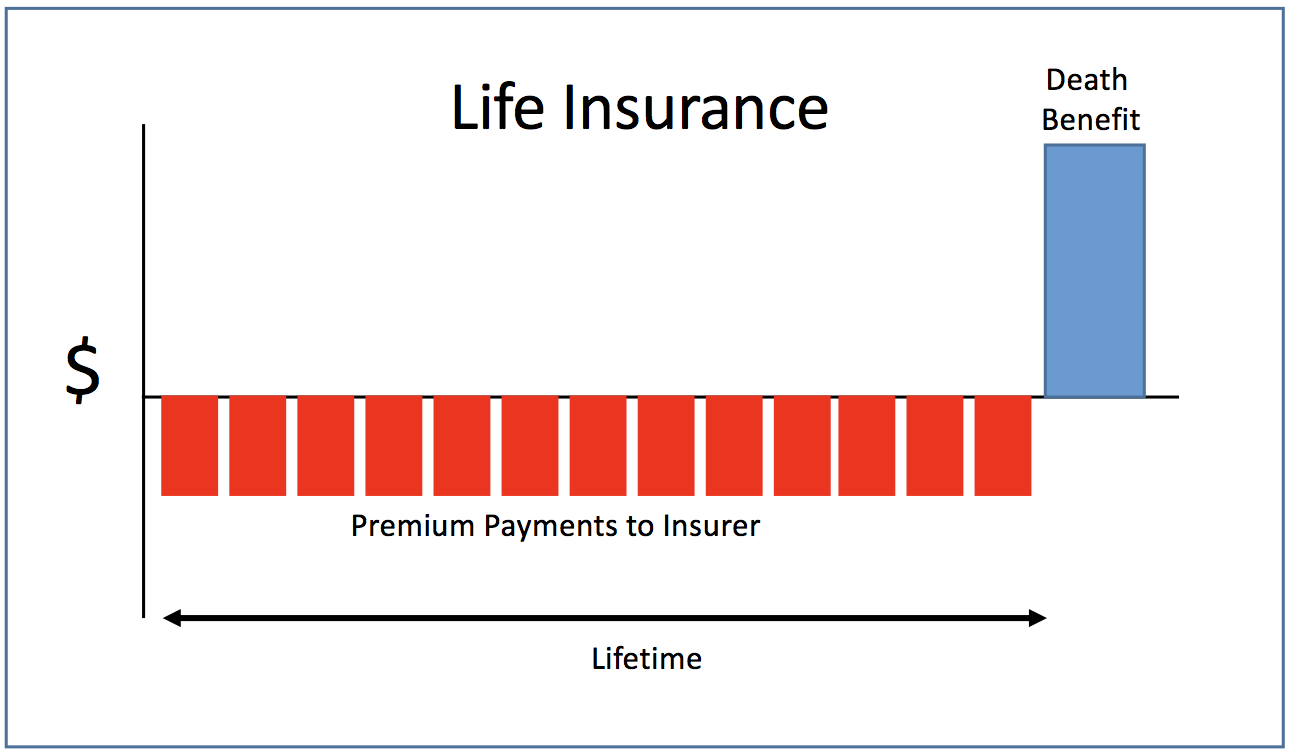 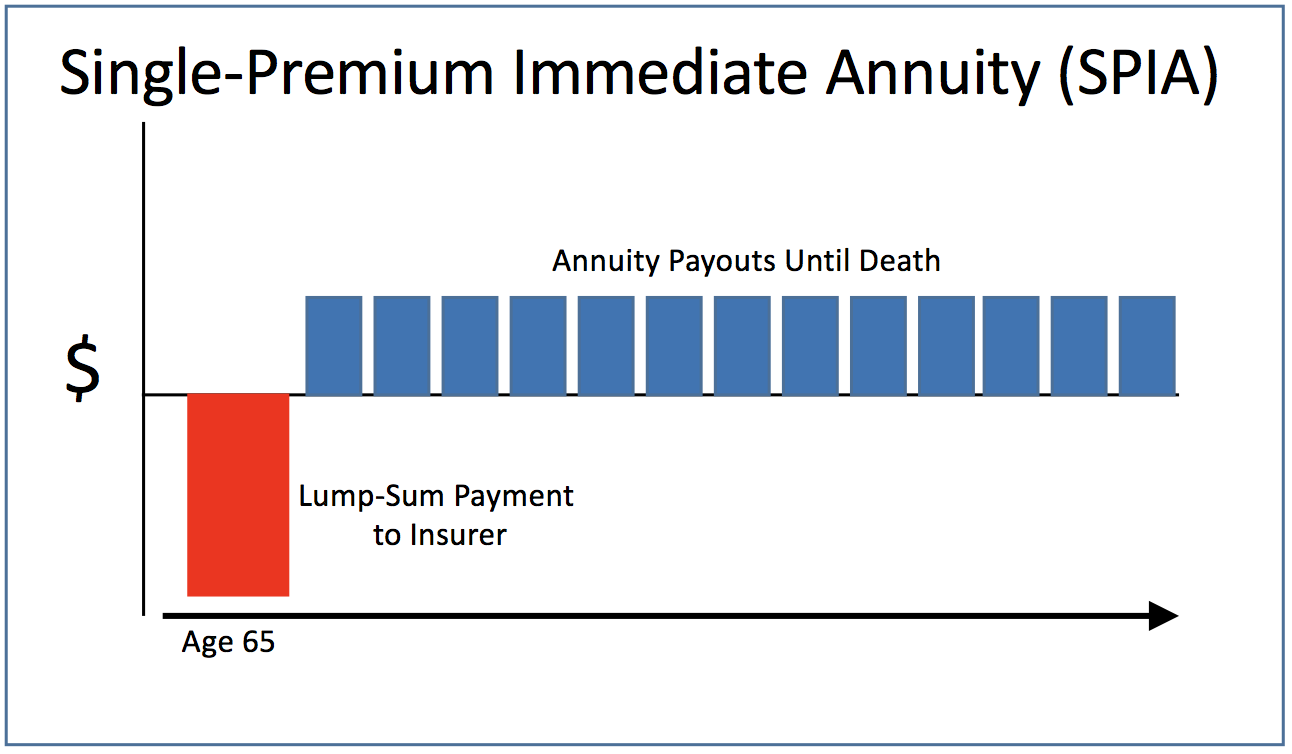 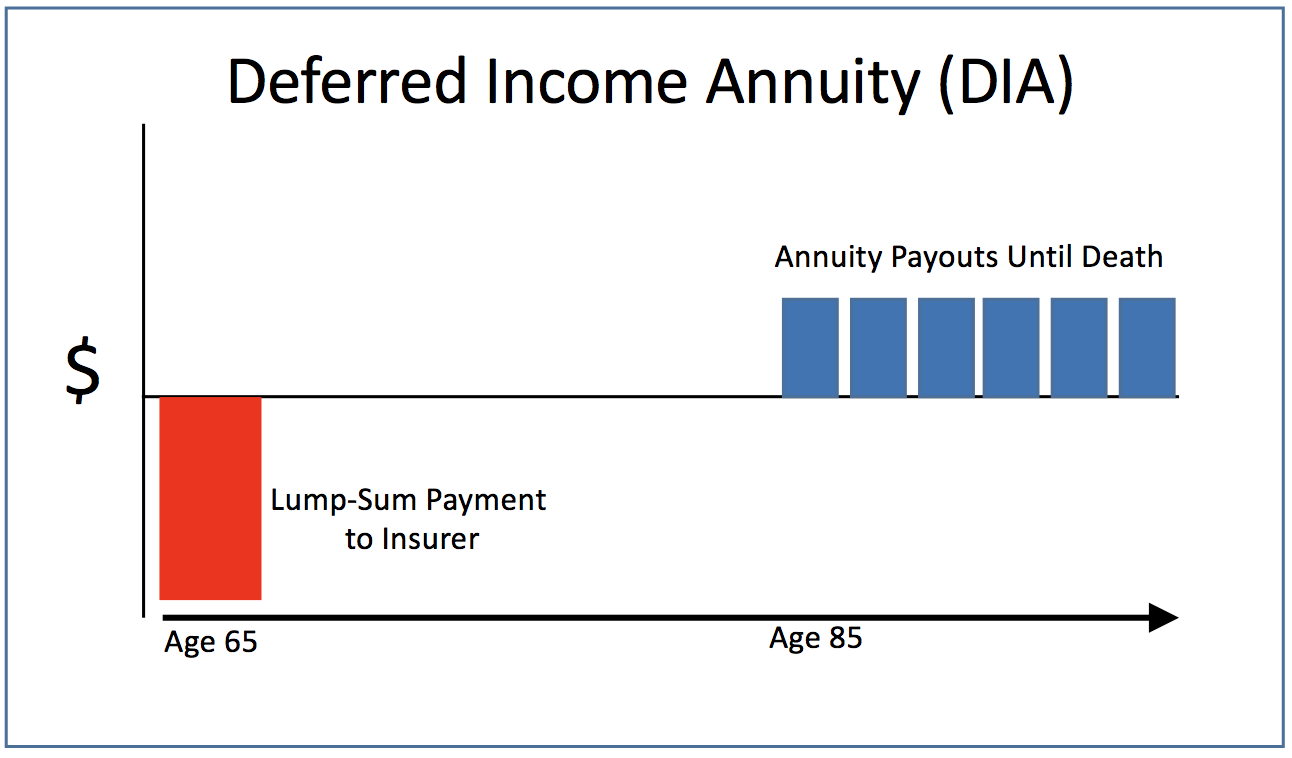 Why would I want to defer an annuity’s payouts? Because deferred annuities and immediate annuities solve two different retirement problems.

The following diagram shows the problem an immediate annuity can fix. The retiree has only a small portion of income generated from pensions and Social Security and may be exposed to a good deal of market risk in the red area. The green “floor” of safe income can be raised throughout retirement with an immediate annuity. 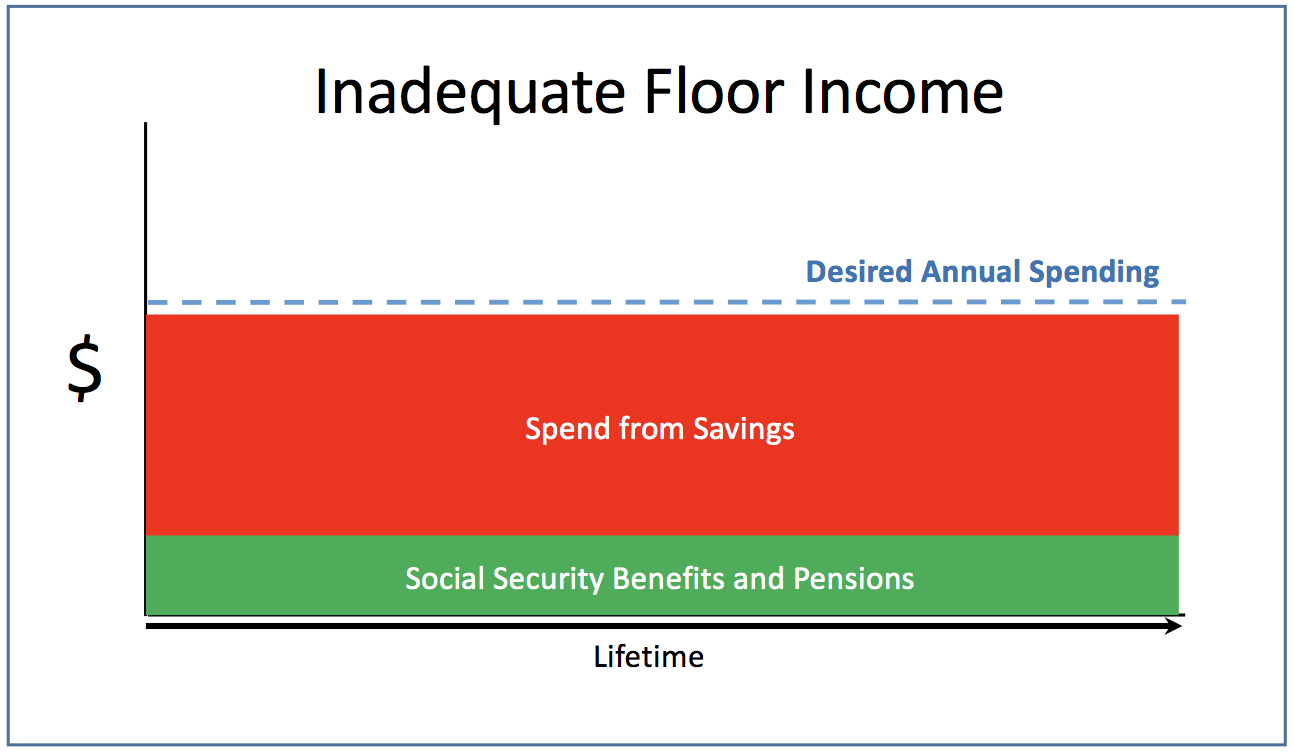 Some households may feel that they have adequate income in early retirement but worry that they might not have enough remaining wealth to fund their desired standard of living late in retirement should they live a very long time. Deferred annuities, also referred to as “longevity insurance”, can solve that problem.

An immediate annuity (SPIA) provides income beginning in less than a year and continues those payouts for as long as the annuitant(s)[1] live. A deferred annuity (DIA) begins payouts at some contracted date in the future if and only if the annuitants survive to that date. At that time, DIA payouts also continue for as long as the annuitants live, but because the insurer will make fewer payouts with a DIA, and none at all if the annuitants don’t survive until the future date, DIAs are a less expensive way to fund late retirement than SPIAs and much less expensive than spending from an investment portfolio.[2]

A good candidate for a DIA might be a household that relies on spending from an investment portfolio and is confident that the portfolio will fund early years of retirement but concerned that it will be prematurely depleted. A study my son and I conducted found that depleting a portfolio before age 80 should be quite rare.[3,7] A DIA is a good way to insure income after age 80 or so in the event of a failed portfolio. 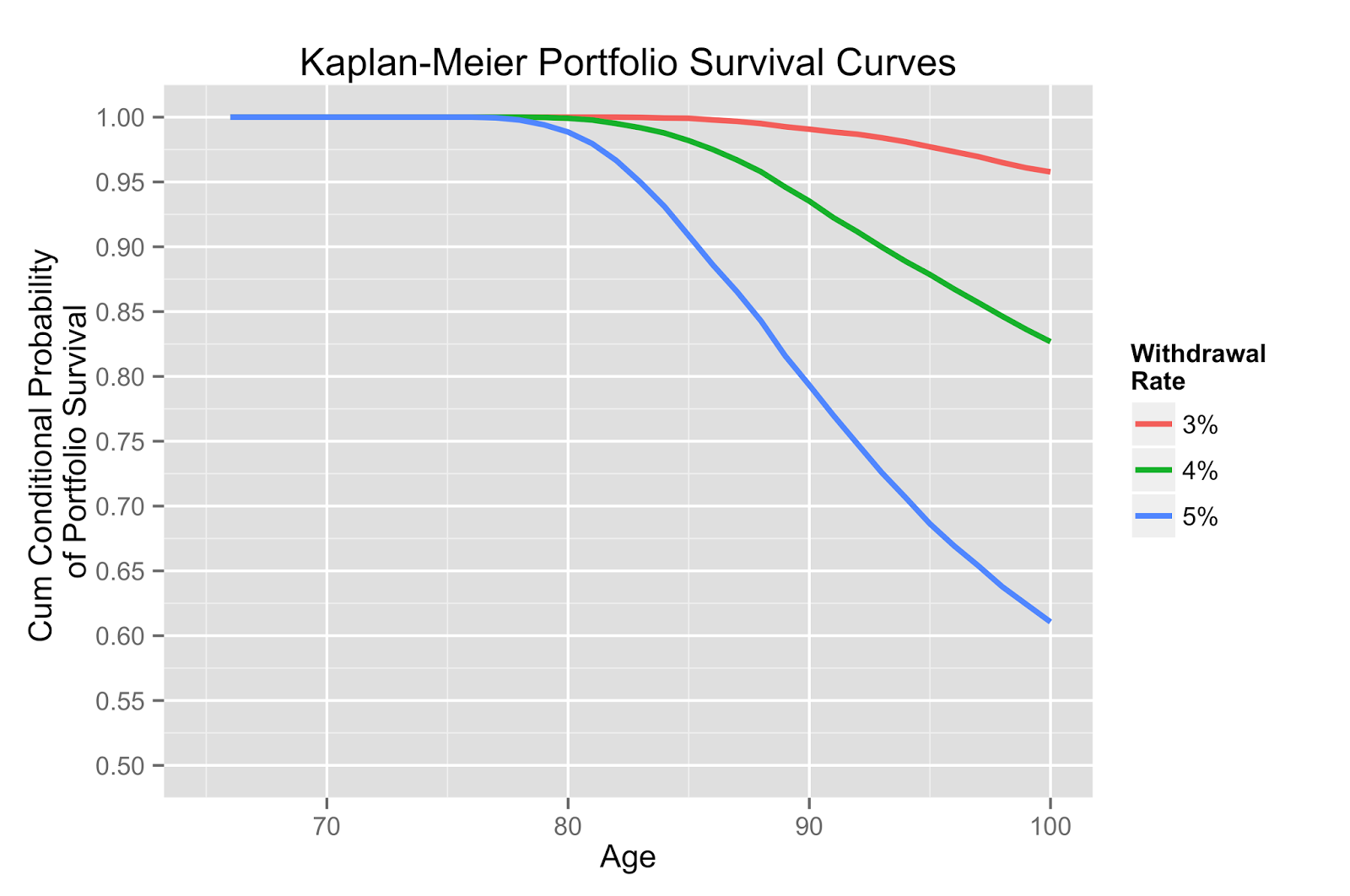 See how portfolio survival rates begin to decrease sharply (risk of ruin increases sharply) once we reach age 80 to 85? Deferred income annuities can provide cost-effective protection against that increasing risk in late retirement for retirees who depend on an investment portfolio for income.

An 80-year old could purchase an immediate annuity today that will generate $10,000 of immediate annual income for $91,070. It’s much cheaper to buy the late retirement income in advance.

The immediate annuity would generate significantly more lifetime income, of course, but it requires more than twice the initial outlay. For households that only expect to need additional income in the event of a very long life, the DIA is the better choice.

This is not an apples-to-apples comparison. This assumes that life expectancies and interest rates will remain roughly the same over those 15 years. I have figured in 3% inflation, which could be high or low. The SPIA purchaser will almost certainly receive some income while the DIA purchaser will receive nothing unless she survives to age 80.

Nonetheless, the annuitant who does live to 80 will fund income the least expensive way. The DIA is longevity insurance and that’s how insurance works. We accept a certain loss (premiums) to protect us from a potentially very large loss (running out of money in late retirement). We pay someone else to accept our risk.

Deferred annuities, like retirement finance in general, have an accumulation phase and a distribution phase. But, the phases might be easier to understand if we describe them as two different products.

When to buy a deferred or immediate annuity and when you probably don’t need one, at all.

Imagine that the accumulation phase of a deferred income annuity (DIA) is like having a fixed-interest rate savings account. The money invested in this savings account is illiquid because the insurer can charge high surrender fees if the annuitant makes withdrawals sooner than the annuity contract allows. Taxes on earnings are deferred until they’re withdrawn, so sort of like a savings account held in a traditional IRA but without a tax break on the contributions.

The value of this account grows until the DIA is annuitized, or converted into a stream of lifetime income, or until the annuitants die, in which case the account value becomes zero. If the annuitants die during either phase, even if payouts have not begun, the results are pretty much the same as with an immediate annuity. That means that unless riders are purchased to guarantee some payout to your beneficiaries, the deferred income annuity will have no residual value.

The second product (the distribution phase) is a life annuity that you will choose to purchase with funds from the “savings account” if you survive the deferral period.  If the annuity is funded from an IRA or 401(k) — a “QLAC”, described below — you must begin annuitization by age 85. Funded outside a retirement account, you can often delay annuitization until age 90.

Another advantage of DIAs compared to immediate annuities is that they require a smaller cash outlay because they only provide income if you survive until late in retirement. According to researcher David Blanchett, “The cost of a DIA, for example, that would provide $10,000 a year of income, if you buy it at age 65, it would cost about 20% of what it would cost to have a SPIA starting today at age 65 to provide that same level of income.” [4]

Wade Pfau wrote a column entitled Why Retirees Should Choose DIAs over SPIAs[5]. The short answer is that deferred annuities are the most economically-efficient way to finance the latter years of retirement should a retiree or spouse live a long time. The more technical answer is that DIAs “expand” the retirement income efficient frontier and create opportunities with higher expected returns for a given level of risk.

There is a special type of DIA worth mentioning, a qualified longevity annuity contract (QLAC). A QLAC is a deferred annuity that you can purchase with qualified funds from your retirement accounts with payouts deferred to as late as age 85.

According to Motley Fool[6], “a QLAC allows the insured to withdraw 25% — up to a maximum of $125,000 for single folks and $250,000 for married couples — from their qualified retirement accounts and exempt these funds from being considered in their RMD calculation from age 70½ onward.”

I recently recommended a QLAC to friends. They plan to annuitize it at age 82, but if they reach that age and their portfolio has held up well, they can choose to defer payouts up to three more years and receive larger checks then. On the other hand, if their portfolio underperforms, they can choose to annuitize a few years earlier and receive slightly smaller checks sooner.

Annuities are not particularly popular although interest in DIAs has recently grown.

One of the problems, I believe, is that retirees often consider annuities in isolation and not as part of an integrated plan. True, the money used to purchase an annuity cannot be left to your heirs. (Unless you buy special riders to continue payouts to your beneficiaries for some guaranteed minimum number of years. Those essentially offset mortality credits and defeat much of the purpose of buying the annuity.)

On the other hand, if you purchase an annuity and die early in retirement, the good news (financially) is that you will have had a relatively brief and inexpensive retirement. That may mean you had plenty of savings apart from the annuity to leave your heirs.

If you live to an old age, an annuity might help you avoid spending other savings that you can leave to heirs. Owning an
annuity may give you more confidence (or may not, depending on your
personal risk aversion) to invest your portfolio more aggressively and
improve your odds of earning a greater return. As Pfau’s research shows, annuitants often end up with greater terminal wealth.

The point is that you need to consider annuities as an integrated part of a retirement plan and consider the entire plan’s terminal wealth instead of focusing on the fact that the annuity has no value at death. If the annuity ultimately becomes worthless but it has preserved other assets, it will have done its job.

This isn’t a thorough treatment of deferred annuities. My goal is simply to explain their salient characteristics for comparison with immediate annuities and Social Security benefits. If you want more information — and certainly if you are considering purchasing one — please see the references below.

The most important takeaway is that deferred income annuities (DIAs) are the most economically-efficient way to fund late retirement by providing “longevity insurance.” Single-Premium Income Annuities (SPIAs) are a better way to provide income throughout retirement for retirees with an inadequate “floor” of safe income. The correct choice depends on the problem or problems you are trying to solve — you might even need one of each.

As I have mentioned often, I believe that retirees should plan retirement in a way that makes them happy. Some people hate annuities; some won’t invest in the stock market. If you understand the pros and cons of each and can’t be persuaded, buy what lets you sleep at night.

[1] An annuity can cover a single life (annuitant) or joint lives (annuitants).

[6] What Is a QLAC, and Why Might You Want One?. MotleyFool.com.