2016 Net Worth and Retirement Budget Update

Do stock returns exhibit long-term mean reversion? That’s an economist’s way of asking if stocks get safer the longer we hold them.

Long-term mean reversion would act like a spring returning prices back to a trend line when they advance above that trend or fall below it. The strength of this spring is referred to as its “half-life”, the time it would take to recover half of a loss or — often conveniently overlooked — how long it would take to lose half of a gain.

A Society of Actuaries report[6] from 2014 states:

“In a survey by Ivo Welch (UCLA and Yale) in 2000, only 36 of 102 surveyed financial economists said that they believed in long-term mean reversion for stock returns (17 had no opinion and 49 did not believe). “

Among those economists who believe mean-reversion exists, a common half-life is believed to be about 17 years. The longer the half-life, the weaker the effect.

This is an important question for investors because, if stock returns do mean-revert in the long run then stocks are a little less volatile on an annualized basis than a random walk would imply.

As retirees, we have to ask some follow-up questions beyond whether stock returns mean-revert. Does mean reversion equate to less risk? If we believe they do mean-revert, what impact would that process have on retirement plans? How would its impact compare to other factors of retirement planning? How should a retiree bet on mean reversion?

Let’s look at the big question first. Do stock returns exhibit long-term mean reversion? Despite extensive research for decades, there is no consensus among economists.

Daniel Mayost of the Office of the Superintendent of Financial Institutions Canada wrote a nice review[1] of the seminal research on the topic in which he concludes,

“The claim that equity returns revert to the mean over the long term is not completely unfounded, and cannot be dismissed out of hand. However, there is at least as much evidence to refute this claim as there is to support it, and there is certainly no consensus answer within the economics profession.”

Well said. So, a definite “maybe.”

Despite the lack of consensus, many stock traders have developed strategies to attempt to profit from mean reversion of equity returns. Do the strategies work? They probably do, sometimes, if for no other reason than because nearly all strategies will work sometimes.

If we assume that equity returns do mean-revert, how would that impact a retirement plan?

That means that long-term mean-reversion might help or hurt retirement finances depending on initial conditions. When returns have been low for a long time, we would expect mean-reversion to slowly lift returns in the future back toward a growth trend line. But if they have been high for a long time, we should expect it to slowly push them lower toward that trend line. It would help when we’re below the line and hurt when we’re above it, keeping in mind that we don’t really know where the line is or, more importantly, where it will be. (In the example below, the red line was added by the author.)

“The concern about future returns is justified by the fact that, while the academic research shows valuations are an extremely poor forecaster of stock returns in the short term, they are the best predictor of long-term returns. A CAPE 10 of 34 translates into a real-return forecast for U.S. stocks of just less than 3%. Add in 2 percentage points for expected inflation and you get a nominal return of about 5%, half the size of the historical return.”

If the market is currently highly valued, as the CAPE 10 seems to suggest, mean-reversion implies that future returns are more likely to trend downward back to the mean. So, presently, mean reversion suggests less annualized uncertainty (risk) about an expected return that is likely to be smaller — less risk but a lower expected return. Mean-reversion isn’t always a winner.

The popularity of the concept of stock risk declining with time grew with Jeremy Siegel’s Stocks for the Long Run[4]. Siegel noted that over long periods of time, stocks do seem to be safer than a random walk would imply.

Economist, Zvi Bodie argues vehemently that stocks are risky no matter how long we hold them. He demonstrates with the following charts that the annual compound risk measured by variance of returns does, in fact, decline with time, as statistics predicts. 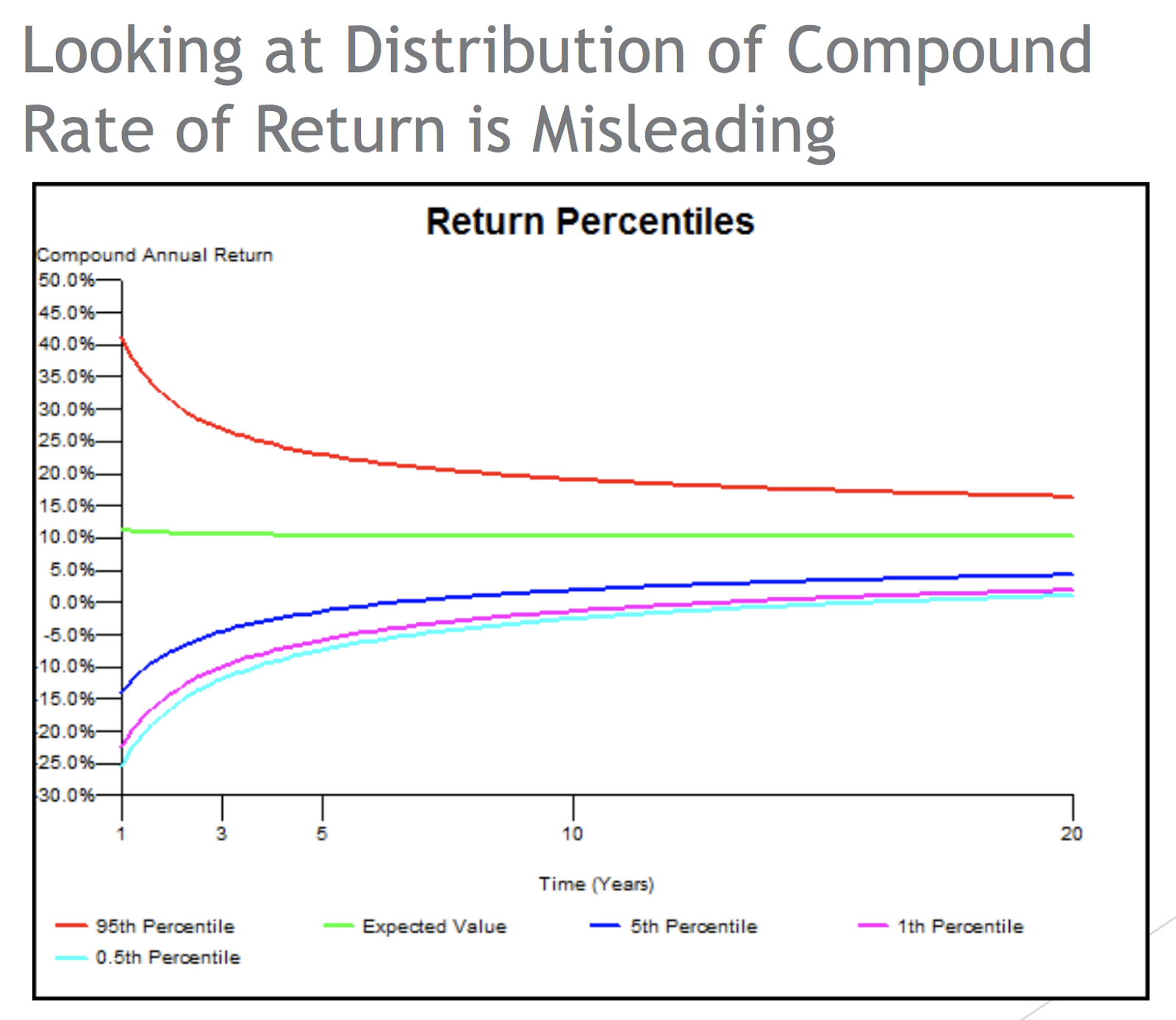 But Bodie argues that annual volatility is less a concern for retirees than the uncertainty of terminal portfolio values, which continues to increase with time. 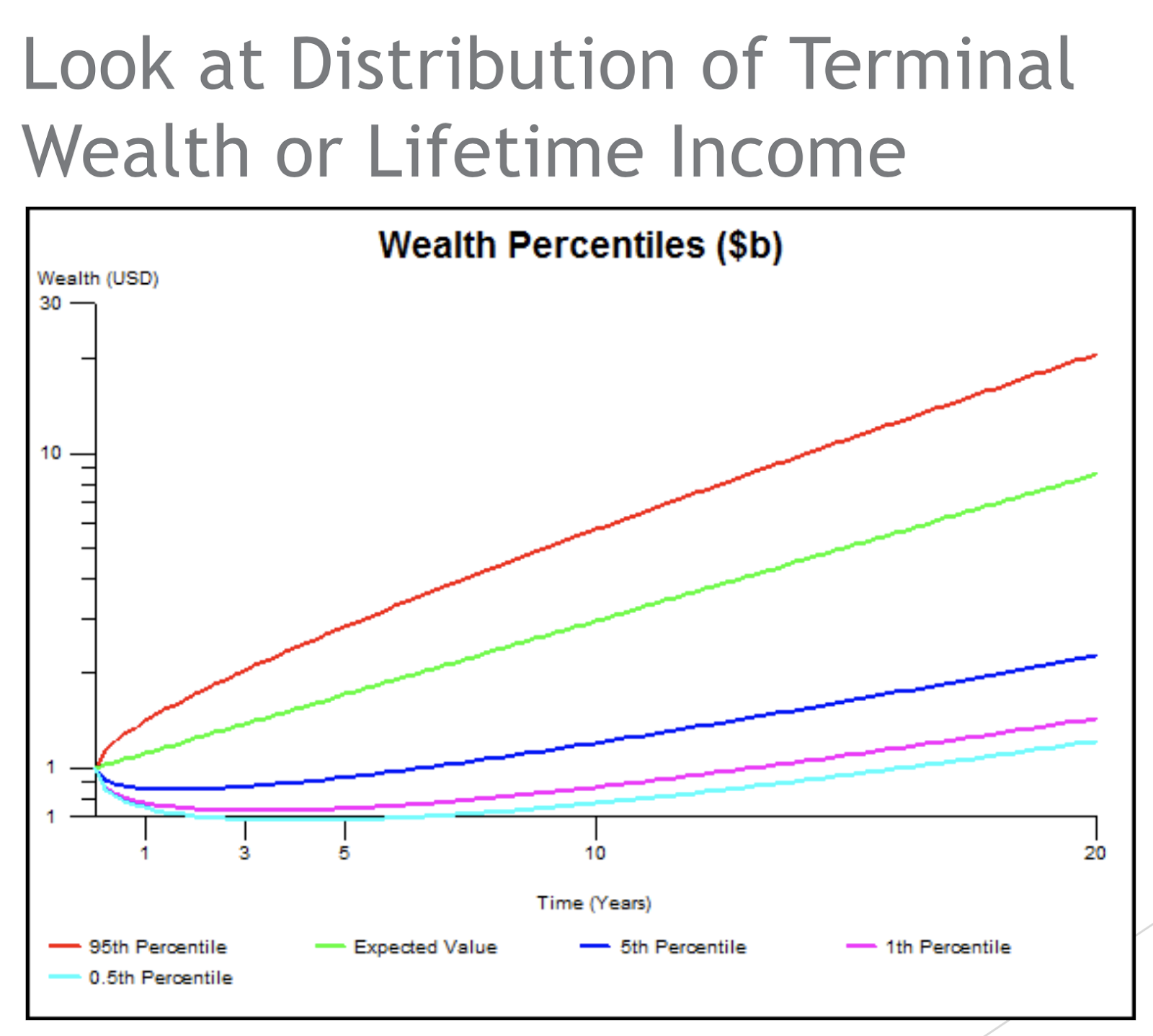 Bodie further argues that if stocks become safer with longer holding times, then the cost of insuring against a loss should also decline. (Please see Dr. Bodie’s further qualification in the first comment below.) We can insure against stock losses by purchasing a put option but puts become more expensive as their expiration date extends into the future, not cheaper.

(If you are unfamiliar with options, a put option, or “put”, is a contract giving the owner the right to sell a specified amount of an underlying security at a specified price within a specified time frame. If you want to ensure that you will be able to sell a stock or index for at least some price in the future, for instance, you may be able to purchase a put to do just that. Be forewarned, however, that this insurance can be quite expensive. An excellent chapter on options can be found in Bodie and Merton’s Financial Economics, 2e[8].)

Bodie and Siegel are brilliant economists and each score a point or two, but like the broader population of economists, they ultimately disagree. (Here is a transcript of a fun debate between Bodie and Siegel on the topic.[5])

There is also a behavioral aspect that could affect retirement plans. Retirees who choose to believe that stocks get safer with holding time might choose a higher equity allocation with little actual evidence to support that decision.

Mean reversion and retirement plans — don’t be so sure.

Retirement plans entail massive uncertainty. The greatest risk is longevity, in that nearly everyone could fund a one-year retirement but far fewer of us could fund one of thirty-five years. I’d rank expense risk second, as a catastrophic expense would destroy most plans. Market returns are extremely unpredictable, as are interest rates but, of course, that’s only important to retirees heavily dependent upon stock investments for retirement income.

The amount of retirement risk explained by long-term mean reversion would likely be quite small compared to these. I’ve read postings from other researchers who played around with mean reversion in their retirement models until they realized that any risk-reducing effects were swamped by the huge remaining retirement risks. That’s one of the reasons I don’t bother modeling long-term mean reversion — along with the fact that I don’t know if it exists or how powerful it might be, so I’m not sure what I would model. (Regardless of what you’ve read, Monte Carlo models can be built with mean-reverting processes.)

My final question is “how should a retiree bet on mean reversion of equity prices?”

Mayost addresses this point for the bank when he states,

“Given the large reduction in segregated fund guarantee reserve and capital requirements that would result from assuming mean reversion in equity returns, it would not be prudent for OSFI to approve equity return models that are based on the assumption of mean reversion without strong evidence that mean reversion actually occurs in the market and is likely to continue in the future. The current state of research does not provide such evidence to a sufficiently high degree of certainty.

That’s a long way of saying, “No one seems to know but it would be imprudent to bet that equity returns mean-revert without stronger evidence.”

To summarize for those of you planning retirement who aren’t interested in reading dozens of papers on long-term mean reversion of equity prices that come to significantly different conclusions with no consensus, I suggest the following.

There is no consensus among economists regarding how powerful mean-reversion of equity returns might be or if it even exists.  The only thing you can know for sure is that whether you believe stocks mean-revert or not, there is a really good argument that you are wrong.

(Note the lack of consensus among economists compared to the number of retirees and advisors who claim to know with certainty that it does exist.)

It is debatable (literally[5]) whether mean-reverting equity prices would actually mean that stocks get safer with holding time. It depends on whether you define “safer” as less annualized portfolio volatility or as a narrower range of possible wealth-generation.

Whether or not stocks get a little safer on an annualized basis the longer you hold them is unlikely to have a large impact on your retirement plan. Your plan contains far more risk than mean-reversion would explain and those risks are where you should spend your planning time.

There are actually two larger issues here. First is how much of our planning efforts we should spend on factors that will probably have little impact on our retirement plans. And second, there is a real risk in feeling “certain” about assumptions that actually have limited supporting evidence.

The most important thing I have learned from two decades of studying retirement finance is how little I know for certain. Unfortunately, overconfidence extends to many retirement planning assumptions beyond the nature of mean reversion of equity returns.

I once had a conversation with a healthy 60-year old client about claiming Social Security benefits and he assured me with great confidence that he would never see age 80.

[5] The Great Debate, Siegel and Bodie.