How to Retire Inspired, Part 2

In a previous post, Income Annuities: Immediate and Deferred, I discussed the problems that single-premium immediate annuities (SPIAs) and deferred income annuities (DIAs) can solve and I included the two charts below. These two problems are also considerations in deciding when to claim Social Security benefits.

The first chart demonstrates the use of an immediate annuity to increase the floor of safe income for retirees with otherwise inadequate Social Security benefits or pensions. (By “safe”, I mean income generated by assets that are not subject to market volatility. No asset is completely safe.) These are households that need safe income as soon as they retire.

The second chart demonstrates the use of a DIA to mitigate the risk of declining wealth late in retirement, should the retiree live that long.[3] This declining wealth could be the result of a failing portfolio, for instance, though as this chart shows, portfolios rarely fail before age 80.

What does this have to do with Social Security benefits? A lot – Social Security retirement benefits are a deferred income annuity, the premiums for which are effectively paid from our FICA taxes. We can begin the benefits payout at age 62 or defer those benefits up to age 70.

I discussed the trade-offs between deferring benefits or claiming them early in Delaying Social Security Claims (or Not), but here’s a quick review.

We can increase our monthly Social Security retirement benefits by about 8% for each year we defer them up to age 70. This can ultimately result in receiving a check that is 32% larger when claimed at age 66 rather than age 62 and up to 76% larger when benefits are postponed from age 62 to 70.

However, there are risks to postponing. Single retirees who decide to postpone benefits to age 66, for example, and die before that age, would receive no benefits, at all. (A lower-earning spouse would receive survivors benefits as if the deceased had claimed retirement benefits at full retirement age.) In fact, the retiree would need to live several years past age 66 for the larger payments to repay the benefits that were skipped. (This isn’t as unlikely as it sounds.)

If we spend from an investment portfolio to provide additional income while postponing benefits (instead of working longer, for example), we may increase sequence of returns risk at the worst time, early in retirement. Over-savers might not see a significant increase in sequence risk but retirees with smaller portfolios probably will.

In exchange for taking these risks, we can receive much higher total lifetime benefits, perhaps hundreds of thousands of dollars more, in the event that we live to an old age. In this way, we are mitigating the risk of scenarios shown in Chart 2 above (declining wealth and/or increasing expenses in late retirement). By claiming benefits at age 62, we are mitigating the early-retirement risks of scenarios with inadequate safe, floor income as shown in Chart 1.

There are a few common strategies for claiming Social Security benefits. One, the “break-even” strategy, suggests that a retiree claim benefits early if they don’t believe they will live past the age when the total of the (fewer) larger benefits overtakes the total of more, smaller benefits.

There are several problems with this strategy, the largest being that many healthy people seem to believe they know how long they will live with very little evidence to support that belief. (They are overconfident.) The second problem with break-even analysis is that it doesn’t consider life expectancies and it’s easy to underestimate the probabilities of surviving to the break-even age.

Here’s an example from Brian O’Connell at US News and World Report.[1]

I often hear retirees say things like, “But I’d have to live 15 more years just to break even!”

In fact, the probability that a 62-year old male will live 15 more years to age 77 and profit by delaying claiming is about 72%, meaning that there is a 72% chance that he would lose the break-even bet by claiming at age 62.

A second common strategy, advocated by many Social Security optimization tools, is to postpone claiming benefits as long as you can to maximize lifetime benefits in the event that you live a long time. This is a “safety first“ strategy and one I prefer to guessing how long I will live.

Although I prefer the second strategy to the first, both are missing critical elements of the decision by proposing that we claim Social Security benefits as an isolated exercise. In reality, the correct claiming decision is largely influenced by the composition of the remainder of our retirement plan.

A retiree with limited savings, for example, probably cannot afford to delay claiming Social Security benefits except by working longer. In that case, the claiming decision is strongly influenced by the retiree’s opportunity to continue working (her “human capital”) and the amount of her retirement savings.

A household that has accumulated several million dollars in retirement savings, at the other extreme, won’t rely heavily on Social Security benefits, at all. It might be wise to claim late as longevity insurance. These households might even claim benefits early and invest them in the stock market since losses there would be unlikely to reduce standard of living. A household with marginal savings would risk their standard of living with this strategy.

I simulated a large number of retirement scenarios randomizing several of these factors including claiming benefits at age 62 and at age 70. I noticed an increase in the number of scenarios that did not meet spending demand throughout retirement when claiming at age 70.

Upon further analysis, I found that delaying claiming benefits increased spending from the investment portfolio in the failed scenarios for those early years of retirement, when sequence of returns risk is at its peak, and in marginal market return scenarios. In these specific scenarios, the additional portfolio spending was enough to deplete the portfolios a few years earlier than claiming at age 62 would have. The impact of increased portfolio spending on portfolio survival when delaying benefits is yet another factor not typically considered by claiming strategies.

Retirees may work longer to delay Social Security benefits, in which case there would presumably be no adverse impact on portfolio spending. In fact, portfolio spending would be delayed, reducing the risk of premature portfolio depletion.

On the other hand, retirees who claim Social Security benefits before Full Retirement Age (currently aged 66 for those about to retire) and continue to work will see their benefits reduced until they reach full retirement age.[2]

In other words, your Social Security-claiming decision will be affected by how long you plan to work after you claim benefits before Full Retirement Age, the decision again depending on the human capital component of your retirement plan.

Perhaps the most challenging consideration is the risk of spending shocks. Even retirees with significant retirement savings face the risk of large unexpected expenses after they retire.

Retirement plans that contain long-term care insurance policies, umbrella liability policies and the like are at less risk of losing standard of living, though the risk is always non-zero. Not every retiree will be eligible for an LTC policy or will be able to afford one, and for those retirees postponing Social Security benefits will help mitigate that risk. The presence and extent of insurance policies in the retirement portfolio will, therefore, influence the claiming decision.

One last consideration is the cost of retirement, which is largely dependent on how long we live. Retirees who postpone claiming and don’t live long will indeed “leave money on the table.” Then again, they will have had a relatively inexpensive retirement that they could probably still afford. Retirees who live a long time will have a very expensive retirement and will likely need the extra income later in life. In other words, postponing claiming Social Security benefits will reduce income for retirees who don’t live long, but their cost of retirement will be lower, too. 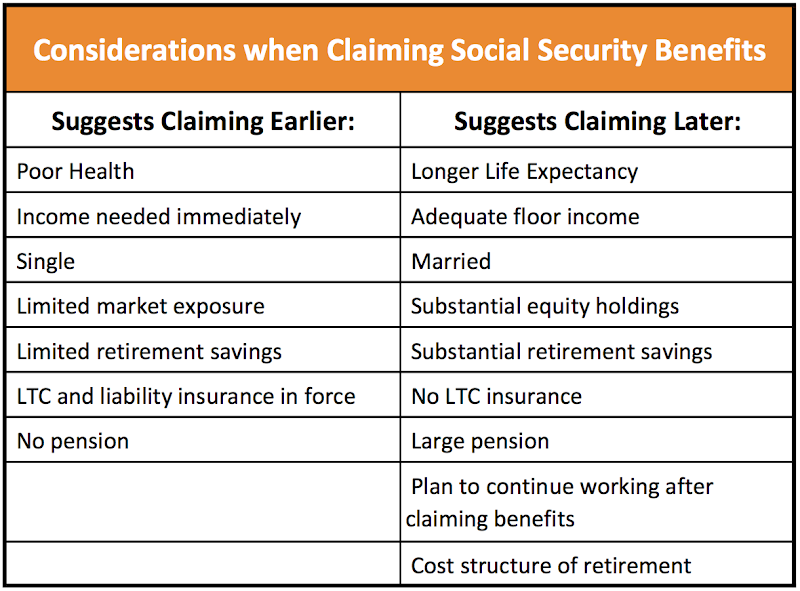 Social Security benefits can solve the same problems as immediate and deferred annuities with even greater economic efficiency. The nature and extent of those problems, however, will be determined by other interrelated retirement plan decisions.

The key point is that a retirement plan is a portfolio of income-generating assets that interact with one another in much the same way as do stocks and bonds in an investment portfolio. Choosing a Social Security benefits-claiming strategy in isolation from the other decisions of the retirement portfolio excludes critical considerations and is likely to provide sub-optimal choices. It’s like trying to pick a stock investment without considering what’s already in your portfolio.

The same goes for setting an equity allocation, choosing an annuity allocation, implementing a tax strategy and most other major decisions. They’re all interrelated. They work as a team.

The retirement financial model is so complex that I don’t see an obvious alternative to simulation to make the best decision. It’s extremely challenging to look at one change to a spreadsheet and understand how it will affect other components. Without simulation, I would never have noticed, let alone have been able to measure, the impact that delaying claiming Social Security benefits might have on portfolio survivability.

If neither you nor your planner is able to perform the simulations, then my original recommendation stands: postpone claiming benefits for the higher-earning spouse as long as you can. Weight your decision using the factors in the table above. If you need the income right away, the decision has been made for you.

[2] What happens if I work and get Social Security retirement benefits?, SSA.gov.