Masterworks Review: A Way To Invest In Fine Art

My recent post on Monte Carlo(MC) simulation, The Retirement Café: The “Future” of Retirement Planning, seems to have spawned a strange debate about whether a deterministic “spreadsheet” method of calculating safe current spending from a retirement portfolio is better or worse than using Monte Carlo simulation to estimate the probability of outcomes.

This debate is not unlike arguing whether a screwdriver is superior to a hammer: they do entirely different things, a good toolbox includes both, and even when you use both effectively, you’re still probably going to need a saw. (I’ll write more about the saw in my next post.)

I’m going to refer to the “method of calculating safe current spending from a retirement portfolio” as a spending rule because that is its purpose. The result is typically a single dollar amount as in, “applying the 4% Rule to a $1M portfolio when expecting a 30-year retirement estimates the retiree can spend $44,000 each year” or “the required minimum distribution(RMD) from your IRA this year is $38,517.”

An interesting observation about these spending amounts is that if you recalculate this amount in subsequent years (as you should do with any spending rule but must do by law for IRA and other tax-deferred plans after age 70½), it is possible but extremely unlikely that you will ever calculate the same result again. That’s because remaining life expectancy, current portfolio value, and other factors will change over time.

On the other hand, the purpose of Monte Carlo simulation is to estimate the probability of outcomes assuming a retiree were to retire many, many times. The probabilities can be used to identify potential problems and allow a planner to attempt to mitigate them.

The result of simulation is not a single number for a single year as calculated by spending rules but one or more probability distributions showing the odds of various outcomes, as in “there is a 5% chance that you will need to spend less than $20,000 under certain conditions.”

While spending rules estimate safe current-year spending, MC simulation can provide additional insight into many questions, such as:

The list can go on and on (this is the reason MC is used for academic retirement finance research) but it does not include “how much can I safely spend this year” beyond what the simulation’s chosen spending rule can tell you before you even begin simulation.

Wade Pfau’s book, How Much Can I Spend in Retirement?[2], provides an extensive inventory of spending rules, including:

At present, I tend to favor Steiner’s ABB[3] for determining current safe spending, an approach which Pfau generally refers to as “actuarial” or “PMT” methods. He notes that Moshe Milevsky also believes this is a great place to start[4].

MC isn’t tied to any particular spending rule, although most free online programs model constant-dollar withdrawals, aka the 4% Rule. That’s unfortunate in my opinion because I consider it a very poor spending strategy.

There is no “Monte Carlo spending rule.”

MC models can implement any of the rules in Wade’s book or any other. MC takes the spending rule of the modeler’s choice and predicts what would happen if that rule were applied every year throughout many lifetimes.

It doesn’t make sense, then, to ask how MC spending compares to these rules. MC uses these rules to calculate annual spending.

Sometimes when I write an MC model I make up my own rule. MC is a good way to compare spending rules.

Not all spreadsheet or “deterministic” models are the same. Ken Steiner’s ABB model, for example, is quite different than spreadsheet models that simply subtract fixed spending each year and then grow the portfolio by the same expected market return growth factor. Unfortunately, there seem to be a lot more of the latter out there.

Not all MC models are the same, either, but like spreadsheet models, most of the free ones are pretty much the same. They often assume a fixed-length retirement, 4% Rule spending and probability-of-success as the evaluation criteria. More concerning, they usually predict outcomes for a portfolio, which is only a small piece of a retirement plan (see The Retirement Café: Three Degrees of Bad). A simulation for retirement planning should simulate retirement finances, not just a retirement savings portfolio.

The practical implications are somewhat complicated. Using a spending rule is relatively straightforward and accessible; good simulators not so much. Steiner offers a free spreadsheet for ABB at his website. Free RMD calculators are widely available. If you are unfamiliar with MC simulation, though, learning enough to use the tool effectively is a daunting task and probably not worth the effort.

Your best bets, in that case, are to find a knowledgeable planner who has access to good software or to pay for Laurence Kotlikoff’s E$PlannerPLUS[1].

Screwdrivers are great for removing a screw but terrible at hammering a nail. Spending rules are intended to estimate a safe amount to spend from a savings portfolio in the current year but tell you nothing about the probabilities of lifetime outcomes from applying that rule repeatedly.

The smooth path of a spreadsheet projection (red in the chart below) is not a rational expectation for a real retirement, nor is the terminal portfolio value it estimates. The future projections are not a median or “expected” outcome. They’re simply an assumption for estimating current spending. 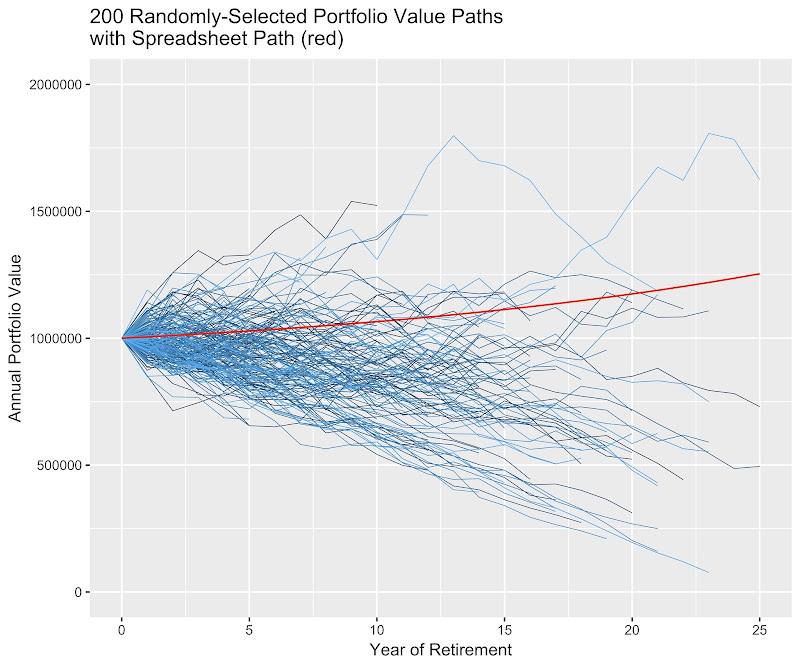 I’m not even sure how to describe that TPV. We could say that it is the terminal portfolio value we would expect if the stock market returned the identical expected return every year with no sequence risk for a fixed lifetime but since none of those assumptions is realistic it is not a meaningful value.

MC simulations only estimate current safe spending by incorporating a spending rule but they’re great for understanding the probabilities that determine the outcomes of the retirement finance “game.”

When I suggested in a previous post that if you are planning retirement with a spreadsheet model you should test it with simulation, I wasn’t suggesting that MC provides a better estimate of current safe spending — it doesn’t do that, at all — but that you understand the probabilities of future outcomes. If you don’t, then you probably don’t have a good understanding of the risk in your plan.

I read a post complaining that these simulations are useless because the retiree can’t know which of those tens of thousands of potential outcomes will be hers. That’s like a poker player arguing that knowing the probabilities of the card deck is useless because a player can’t predict which card will be drawn next.

If you recalculate a good spending rule every year (variable spending) you are unlikely to deplete your portfolio, although spending could become awfully tight should your portfolio fall on hard times.

(For example, there’s an excellent post at EarlyRetirementNow.com[5] showing how Draconian spending cuts could become using the Guyton-Klinger Guardrails spending strategy. “Sustainable withdrawals” means you aren’t likely to deplete your portfolio. It doesn’t imply that the variable amount you will be able to safely spend will be enough to sustain you.)

On the other hand, simply recalculating spending annually means you’re planning one year at a time. I prefer a plan with a longer horizon that is updated every year. Keep your eyes on the prize and make the necessary annual adjustments to get you there.

Spending rules estimate a safe amount to spend in the current year. Monte Carlo simulations estimate the probabilities of future outcomes one should expect when recalculating a chosen safe spending estimate every year over many lifetimes. But, MC only thoroughly covers reasonably-probable outcomes. A good retirement plan still needs a “saw” to cover the improbable.

More on that next time in Some Risks Can’t be Modeled.

[2] Amazon.com: How Much Can I Spend in Retirement?: A Guide to Investment-Based Retirement Income Strategies eBook: Wade Pfau: Kindle Store