Sustainable Withdrawal Rate (SWR) strategies are based on the work of William Bengen[1], whose research uncovered sequence of returns risk. The basis of the strategy is that there is a constant amount of spending from a stock and bond portfolio that would have been “safe” in 95% of historical 30-year periods of stock returns.

SWR had a colorful beginning. Peter Lynch of Magellan Fund fame posited that a retiree should be able to invest in stocks and spend about 7% of her portfolio forever. Scott Burns quickly showed that a 7% withdrawal rate was far riskier then Lynch imagined.[2]. (The culprit, as Bengen would show, is sequence of returns risk. The order of market losses is more important than the average return.)

Lynch’s response was, “OK, but surely there is some percentage that would work?”

Bengen found that the safe withdrawal percentage rate in the U.S. was historically 4% to 4.5% over rolling 30-year periods of market returns, hence the “4% rule.”

Wade Pfau later showed that number only worked in the U.S. and a handful of other countries[5]. More recent work by Pfau suggests that the number at present is perhaps 3% to 3.5% — a sizable range. A range of 3% to 4.5% may sound small but it’s the difference between a safe spending amount of $30,000 and $45,000 a year per $1M of savings. Regardless, it’s well below Lynch’s 7% assertion.

The basic process for implementing this strategy is for a retiree to calculate 4% (or 3% or 4.5%, depending upon who you choose to believe — I’d go with Pfau) of her total investment portfolio value the day she retires and to spend that dollar amount (not percentage) for the rest of retirement, increasing it annually by inflation.

A retiree with a million dollar portfolio who agrees with Pfau’s 3.5% could spend $35,000 the first year of retirement. If inflation ran 2% that year, he could spend $35,700 the following year.

This strategy will result in two possible outcomes when simulated, though actual retirees might not behave this way. The strategy will produce a constant, inflation-adjusted income amount from the portfolio until the retiree dies or the portfolio is depleted, whichever comes first. SWR practitioners try to minimize the latter outcome to “only 5% or 10%” of retirements, or 1-in-10 to 1-in-20.

With all due respect to Bengen, whose research exposed sequence risk — an important contribution — I consider this strategy irrational and believe that it probably makes sense only for households with so much savings that they don’t need it. The idea that we can spend an amount calculated at the beginning of retirement and continue spending it regardless of what happens to our financial situation over perhaps 30 years is not only risky but irrational.

Constant-dollar spending strategies are risky for households that aren’t wealthy and unnecessary for those that are.

As retirement progresses, our finances and life expectancy will change, our finances for better and for worse. Life expectancy constantly declines. Constant-dollar spending is a strategy to ignore any of this new information after the original spending amount is calculated.

Larry Frank, David Blanchett and John Mitchell published research[3] showing that our spending should be “dynamically” adjusted as our finances change over time but you probably don’t need to read the research to understand this.

Instead, have this conversation with your 75-year old wife. “How much can we spend this year, Walter?”

“Thanks, but how do you know that, Dear?”

“It’s the amount we could safely spend a decade ago based on our life expectancy and wealth back then.”

Let me know how that conversation works for you.

Wade Pfau and Jeremy Cooper wrote a great explanation of the strategy (and others) for Challenger Ltd[4]. Granted, mine is more cynical, but they’re decades from retirement and I’m a decade into it. I have more skin in the game.

Here are some considerations I have learned by running a gazillion retirement simulations that you probably won’t find elsewhere without a lot of digging.

SWR strategies are based on the assumption that future market returns will be similar to historical returns but there is a lot of reason to believe they will be lower in the future. Even if they are similar, we don’t know the expected market return, whether it changes over time or even the distribution of those returns. We pretend they are normally distributed, largely because it makes the math easier, but empirical evidence shows that there are far more extreme market events than a normal distribution would predict. That’s a lot of uncertainty on which to bet one’s retirement.

Many retirees who like this strategy believe that they are creating their own annuity without committing a large sum of money to an insurance company. There is a specious similarity to an annuity in that both provide constant income but SWR is like an annuity from an insurance company with a 5% to 10% chance of going out of business.

Further, annuities provide maximum lifetime consumption while SWR strategies are economically inefficient. It’s expensive to tie up 96% of your wealth so you can safely spend 4% of it[6].

Self-annuitizers may expect that have more liquidity with a SWR strategy than they actually have. In the same way I explained that the liquidity of TIPS ladders can be illusory, spending from an SWR portfolio to meet large, unanticipated expenses means spending income you were counting on for the future. Certainly TIPS ladders and investment portfolios are more liquid than annuities but there is a price to pay in the future for spending them early. 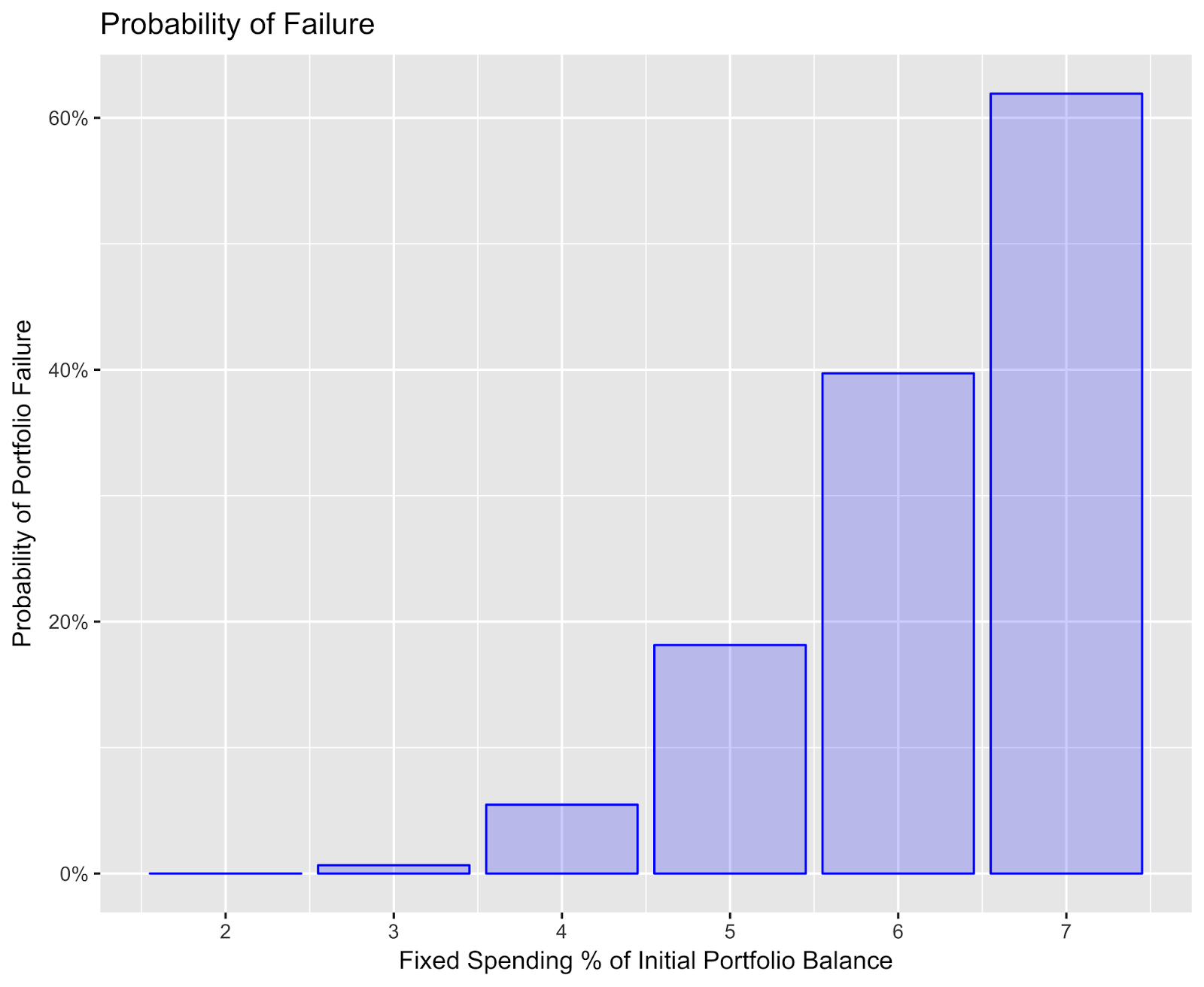 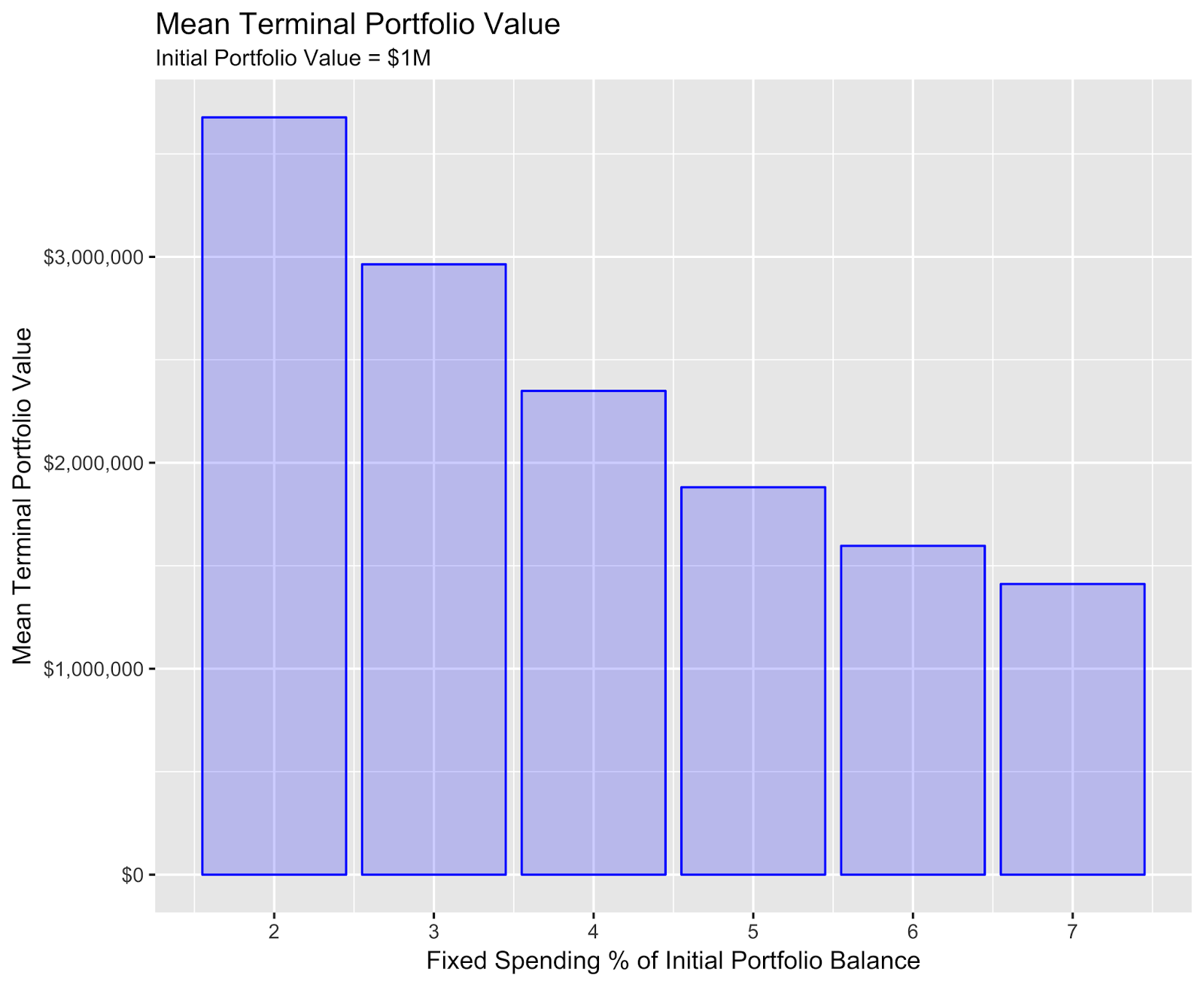 Retirees with limited wealth relative to their spending needs may need to spend a larger percentage and accept a greater portability of outliving their savings. They are less likely to accumulate a large terminal portfolio.

Retirees with adequate savings can play it safe with a low withdrawal rate but they are more likely to die with a large portfolio. This is a good thing for households with a strong bequest motive but not so good for those without. Without a bequest motive, a retiree who plays it safe with a low withdrawal rate may find late in retirement that she has an extra million bucks she could have spent to enhance her life.

This may be ideal for a household with so much wealth that they can easily afford their desired standard of living and still expect a large portfolio to leave to heirs but then one must ask why a household this wealthy needs a SWR strategy, at all.

As I explained in Retirement Income and Chaos Theory, constant-dollar spending strategies are probably chaotic when the portfolio is sufficiently stressed. It’s a bit like hanging around the event horizon of a black hole in that scenario where just a little bit of bad luck can nudge your strained household finances into an irreversible downward spiral.

In a post entitled, “Time to Retire the Probability of Ruin” back in April 2015, I wrote that we should stop basing retirement plans on this metric. A short time later, Moshe Milevsky wrote a better piece entitled, “It’s Time to Retire Ruin (Probabilities)“[7].

Constant-dollar spending strategies are quite unpopular among economists and most of the researchers I know. They are sometimes popular among planners who charge fees based on assets under management and retirees who see them as an annuity alternative.

I am none of those and not a proponent of constant-dollar spending strategies. I have many reasons, but the most basic are that it is irrational to ignore new information that comes available as retirement progresses and financially unsound to attempt to derive constant income from a volatile portfolio. The strategy is risky for retirees who are not wealthy and unnecessary for those who are.

Ultimately, it isn’t possible to re-create an annuity with a one- or two-person risk pool. Rational strategies to spend from a volatile portfolio will suggest that we spend more when our portfolio grows in proportion to our spending and life expectancy and demand that we spend less when it shrinks. That requires a variable spending rule strategy, which I will address next.

[4] The Yin and Yang of Retirement Income Philosophies, Pfau, Cooper.

[5] Journal The 4 Percent Rule Is Not Safe in a Low-Yield World, Wade Pfau.