The answer is yes. It will go up or down from here.

Whenever the market has a large setback (this one is 7% so far, but it happened quickly and may or may not be finished) many of us feel a responsibility to tell our readers not to panic.

So, here’s my advice: don’t panic. (I hope to provide more useful advice below.)

To the extent that history is a guide, the market will be higher sometime in the future but no one knows when that will be.

It could be Friday.

When you read how quickly the market recovers from big losses, it’s important to note that a retiree’s portfolio is not the market index. It probably took longer for a retiree to recover from those losses than it took the market because she was selling stocks to pay bills during that period. At the other extreme, someone in the accumulation phase might have recovered sooner than the market if they were not spending but instead contributing additional savings during those years.

Saving during your working career is like periodically throwing more money into your retirement boat. Spending from that portfolio during retirement is like owning a leaky boat.

It is important to ignore the advice of those who say this is the beginning of a much larger market decline because they can’t know; they’re only guessing.

It is equally important to ignore the advice of those who say this is a great buying opportunity because they’re guessing, too.

Ignore those telling you this is the beginning of a crash. They’re only guessing. Also, ignore those saying it’s a buying opportunity. They’re guessing, too.

You should pay more attention to experts who simply admit that they don’t know. Unfortunately, no one is going to interview them because they’re boring.

My wife received a text message from a friend last night. “Mary wants to know if they should buy or sell?” she asked from the other room.

Assuming Mary was really asking if the market will go up or down from this point, my initial answer was that they should go to a movie. After a little more thought, I admitted to myself that I know little about their finances and maybe there are good reasons for them to buy or sell, though short-term market volatility wouldn’t be a good one.

“How much of their retirement savings have they invested?” I asked.

OK, so that gets my attention. That portfolio would have fallen over 50% during the Great Recession. I couldn’t tolerate that but maybe they could. I usually recommend 40% to 60% equity for a portfolio from which a retiree is spending. If there are no known liabilities to match (future bills to pay) with that portfolio, I might go with 80%.

So, three important points. First, the market fell about 14% after 9/11. It rebounded 21% in three months. Hardly the Great Recession’s 50% loss and not much of a test of one’s risk tolerance.

Second, Mary and her husband were working back in 2001 and presumably saving for retirement. As I explained above, there is a world of difference in recovery time between the accumulation phase and the distribution phase.

I promised to provide some more useful advice, so here it is. After you refuse to panic per my previous instruction, reconsider your risk tolerance. It should be lower after retirement because you no longer have a safety net of new savings contributions and no job, for that matter. Retirement is riskier.

If this recent market crash made you feel a need to sell, then it has done you a favor — it’s telling you that your equity allocation may be uncomfortably high. After you weather this market volatility, consider lowering your equity exposure.

I like William Bernstein’s recommendation to limit your equity exposure in retirement to the maximum loss you could tolerate in a severe bear market. The following table was published before 2007 in The Four Pillars of Investing but I held 40% equity back then and my portfolio fell only 15%, as he predicted. 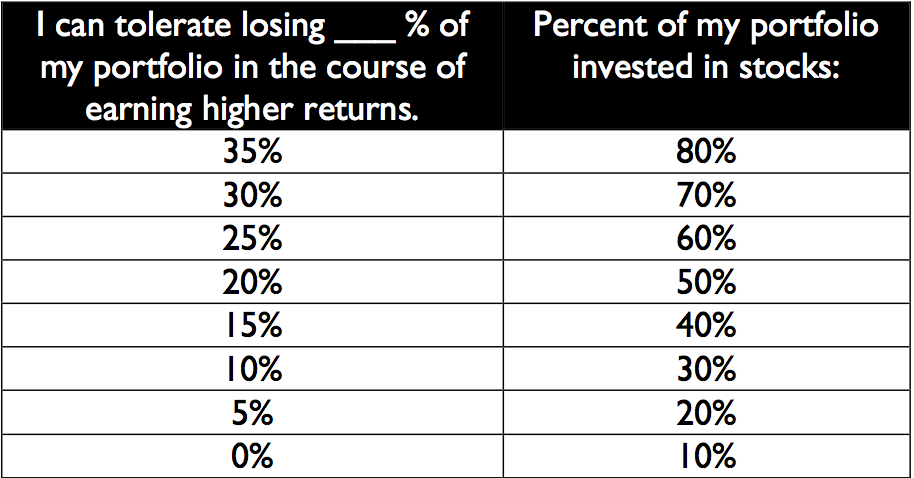 Be forewarned that if you held an uncomfortable equity allocation before the downturn and lower it before the recovery, that recovery will take longer. If your portfolio fell precipitously because you were holding 90% equities and you lower that to 60%, it won’t climb as quickly as it fell.

Should that happen it will be the result of a previous error — overestimating your risk tolerance. That past mistake may cost something but you can fix it going forward.

Your risk tolerance changes over time and is generally much lower during a market decline than you expected it would be during the previous bull market.

So, don’t panic. If you don’t feel panicked, then your equity allocation may be just fine. If you do feel a bit anxious, wait until the smoke clears and then think about whether you have underestimated your risk tolerance. Adjust your equity exposure then.

The worst thing you can do is panic and sell at a market bottom, though that is exactly what many people do.

In the meantime, ignore the guessers.

[1] The Dow’s tumultuous history, in one chart, MarketWatch.