How Victims of Domestic Violence Can Afford Transitional Housing 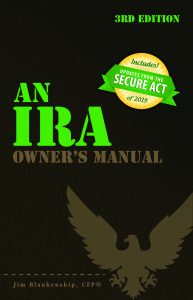 In 1974, Congress passed the Employee Retirement Income Security Act (ERISA) that, among many other provisions, provided for the implementation of the Individual Retirement Arrangement.  This original IRA was not deductible from income for tax purposes, and the annual contribution limit was the lesser of $1,500 or 15% of household income.

Two primary goals of the IRA were to provide a tax-advantaged retirement plan to employees of businesses that were unable to provide a pension plan; in addition, to provide a vehicle for preserving tax-deferred status of qualified plan assets at employment termination (rollovers).

The Economic Recovery Tax Act (ERTA) of 1981 allowed for the IRA to become universally available as a savings incentive to all workers under age 70 1/2.  At that time, the annual contribution limit was also increased to $2,000 or 100% of compensation.

With the passage of the Tax Reform Act of 1986, income restrictions were introduced, limiting the availability of deductible contributions to the TIRA for individuals with incomes below $35,000 (single) or $50,000 (MFJ) when covered by an employer plan.  In addition, provision was made for the Spousal IRA, wherein the non-working spouse could make contributions to a TIRA from the working spouse’s income.  Non-deductible contributions were also allowed, for those individuals above the income limits, providing tax-deferred growth within the account.

In 1992, provisions were made to the TIRA to allow for “special purpose” distributions (known as §72(t) distributions), not subject to the 10% early withdrawal penalty.

1996’s Small Business Job Protection Act saw the implementation of the Savings Incentive Match Plan for Employees (SIMPLE IRA), which provided for employer matching and contributions to the employee plans, a viable alternative in many cases to the 401(k), although with more restrictive contribution limits.  This act also increased the amount for Spousal IRA contributions from $250 to the annual limit (at the time, $2,000).

With the Taxpayer Relief Act of 1997, the Roth IRA was introduced.  In addition, phase-out limits were increased, plus the distinction was added for limits on deductible contributions if the taxpayer was covered by an employer-provided retirement plan. The Education IRA was also introduced, with features similar to the Roth IRA (non-deductible but tax-free upon qualified distribution). The distributions from the Education IRA are qualified only if used for education purposes. The Education IRA was later renamed the Coverdell Education Savings Account in 2002.

In 2001 came the Economic Growth and Tax Relief Reconciliation Act (EGTRRA), which further increased contribution limits, added a “catch-up” provision for taxpayers age 50 and older, and provided for a nonrefundable credit for certain contributions to IRA and 401(k) plans.

An additional provision in the EGTRRA was the option, available beginning in 2010, for Traditional IRA owners to convert funds to a Roth IRA, regardless of income level. Normally anyone with an income above $100,000 was ineligible to convert funds from a TIRA to a RIRA.  In addition to releasing the income cap, converting taxpayers were allowed to split taxation evenly on the funds converted between tax years 2010 and 2011.

The Bankruptcy Abuse Prevention and Consumer Protection Act of 2005 expanded protection for IRA accounts in times of bankruptcy. Traditional and Roth IRAs established via contributions from income are exempt from bankruptcy inclusion up to $1,000,000 balances without having to show necessity for retirement (required previously). Amounts rolled over from employer retirement plans are entirely exempt.

In 2006, the Pension Protection Act allowed for charitable giving (free of tax) from an IRA, known as a Qualified Charitable Distribution (QCD). This provision was originally made only for one tax year at a time and renewed annually as Congress sees fit. In addition, this legislation introduced the Saver’s Credit, an income tax credit for lower income individuals, designed to incent retirement saving habits. The Qualified Charitable Distribution (QCD) has been al-lowed to expire in the past and was extended, but as of the 2018 Tax Cuts and Jobs Act passage, has been permanently extended.

The Consolidated Appropriations Act of 2016 finally made Qualified Charitable Distributions (QCDs) permanent. This feature applies to individuals age 70½ or older and subject to Required Minimum Distributions. These folks are allowed to make direct distributions to charitable entities from their IRAs without having to include the amount of the distribution in gross income for the tax year.

One additional change that came about with the Tax Cuts and Jobs Act of 2018 was the elimination of recharacterization of Roth IRA conversions.

Most recently, the Setting Every Community Up for Retirement Enhancement (SECURE) Act, passed in late 2019, made sweeping changes to the IRA landscape. Specifically, Required Minimum Distributions are now required to begin in the year the IRA owner reaches age 72 (used to be 70½); IRA holders are now allowed to continue making contributions to their plan at any age as long as they have earned income (previously not allowed after age 70½); and most significantly, with some exceptions, the stretch IRA has been curtailed for most inherited IRAs. For most non-spouse beneficiaries, the inherited IRA must be distributed within 10 years, where previously an IRA beneficiary could stretch payments out over his or her lifetime.

As of the most recent reports from 2018, the Investment Company Institute indicates nearly one-third of all Ameri-can households own an IRA account (over 42 million households), and the accounts held just less than $9 trillion of retirement funds. Approximately 22.5 million house-holds have a Roth IRA, holding roughly $800 billion in assets, while traditional IRA are owned by 33.2 million households, holding $7.5 trillion.