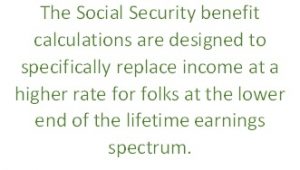 During your career you may have worked for a governmental agency or a foreign employer where there was no Social Security tax withheld from your earnings (Job A). At the same time or at some other point, you may also have worked in a job that was covered by Social Security (Job B). The end result is that now you’re ready to retire, and you will collect a pension from the Job A, and you’re also eligible to collect Social Security benefits based on Job B. But the Social Security benefits are being reduced because of something called WEP – Windfall Elimination Provision. Why is this WEP even in existence?

You’ve probably heard that this provision prevents “double-dipping” in retirement benefits from two systems. That’s true, but it doesn’t really explain why WEP is a factor for many retirees. In order to understand why WEP even exists we need to understand how Social Security works.

The PIA derives from another figure, known as the Average Indexed Monthly Earnings, or AIME – which is effectively your average earnings over your top 35 years of earnings in your career, with an index applied.

Similarly, if Andrea’s AIME was $2,000, the calculation would go like this:

The Janice’s PIA is 40.67% of the AIME, while Andrea’s PIA is 59.84% of the AIME. This means that Andrea’s potential Social Security benefit will replace almost 50% more of her income as opposed to the rate that Janice’s Social Security benefit will. True, Janice still has the higher benefit coming to her, but she earned 3X as much over her lifetime than Andrea did (and therefore paid in 3X as much tax).

This is a quick illustration of how Social Security prioritizes benefit replacement at lower levels of average lifetime income. The lower your AIME over your lifetime, the greater percentage of your pre-retirement income will be replaced by Social Security benefits. If your AIME was exactly (or less than) $960, you would expect a PIA of 90% of your AIME.

At the other end of the spectrum, the more you earn over your lifetime, the less your pre-retirement income will be replaced by Social Security. Once your AIME goes above the second bend point (in this case, $5,785), each additional dollar added to the average for your lifetime will only increase your PIA by 15 cents.

Now that we have a handle on how Social Security benefits are calculated in the normal circumstances, let’s add a new wrinkle to the picture: what if the individual had earnings from a non-Social Security-taxed job in the mix?

Let’s say we have Lucy, also turning 62 in 2020, who also has an AIME that is $2,000 – but Lucy didn’t produce this relatively low AIME by working in lower paying jobs. She produced this AIME because she had worked in non-Social Security-taxed jobs for most of her career, and then at the end of her career she worked in the private sector, just long enough to produce the proper number of Social Security credits to qualify for benefits (40 quarters, or 10 years). Since the AIME is calculated based on your top 35 years of earnings, and Lucy only has 10 years of earnings, her AIME is considerably low by comparison to the actual earnings. She was actually earning pretty high income during those 10 years, but the averaging mechanism brings down the AIME. If not for WEP, Lucy could wind up with the same PIA as Andrea – even though she only participated in the Social Security system for only 10 years and the rest of her career her income was not subject to Social Security taxation.

This is a quandry – it’s not right that Lucy should get the same benefit as Andrea. After all, Lucy is also collecting a pension from her non-SS-taxed job on top of the Social Security benefit. True, Lucy should get some Social Security benefit, but her income replacement level for those 10 years of earnings should not be at the upper end of the spectrum as Andrea’s are.

WEP addresses this problem by reducing the first bend point multiplier. In the case of Lucy, the first bend point is reduced to 40% (instead of 90%). The other multipliers remain the same, because the main thing the provision is addressing is the lowest levels of income replacement. So here’s how Lucy’s PIA is calculated:

So Lucy’s income replacement from Social Security is 35.84%, while Andrea’s was nearly 60%. This is how and why WEP works the way it does.

So what if Lucy’s $2,000 AIME was produced over 35 years of side-jobs instead of over the relatively short 10-year timeframe illustrated above? Assuming that those 35 years of earnings were “substantial” by Social Security’s definition, then the WEP impact would be eliminated from her PIA calculation, and Lucy would have the exact same PIA as Andrea. She’d collect that amount plus her pension from the non-covered job. For more details on how this works, see this article about substantial earnings.

On the other hand, what if Lucy’s pension from the non-covered job was somewhat low? What if, for example, Lucy worked in the governmental job for 10 years, then raised her children for 20 years, during which she didn’t earn any outside income, and then after the kids were all in high school she went back to work over the intervening 10 years in a Social Security covered job?

In a case like this, assuming that the pension earned from the non-covered job is relatively small, there is a limitation on the impact that WEP can apply to Lucy’s PIA. If her pension from the non-covered job was, for example, $500 a month, then the WEP reduction is limited to half of the amount of the pension. Everything else remaining the same from the earlier example, Lucy’s PIA would be calculated as:

Likewise, if the original (non-WEP-impacted) PIA is relatively low, there is another cap put in place to ensure that WEP doesn’t reduce the PIA to an amount less than 50% of the original WEP. So, if Maria, who also worked in a non-SS-covered job for most of her career, but only earned enough in SS-taxed jobs to produce an AIME of $800, her PIA would be calculated like this:

The point of all of this is to explain why the WEP provision exists in the first place. Social Security was never designed to provide the same amount of income replacement to all individuals participating in the system. The Social Security benefit calculations are designed to specifically replace income at a higher rate for folks at the lower end of the lifetime earnings spectrum.

When an individual only participates in the Social Security system for a relatively short period of time, the average earnings are artificially lower due to the averaging method. If this is because he or she was working in a non-covered job for the rest of his or her career, the benefit calculation would give this individual a high income replacement based on this artificially low average income. WEP provides a method to adjust the benefit calculation so that income replacement is more appropriate to the circumstances.

Ask the Readers: How Do You Celebrate Thanksgiving on a Budget?

A New Approach for the Retirement Cafe Blog

How Generous Are You With Money?

A New Approach for the Retirement Cafe Blog

I apologize for the lengthy surprise interruption of posts at ...

How Generous Are You With Money?

Recently when I treated my mom out for lunch, she ...

For many of us trying to save for retirement, our ...