5 Avenues to Easily Get Free Stuff

529 plans are the most commonly used college savings vehicle among my regular readers. They benefit from higher annual contribution limits than Educational Savings Accounts (Coverdell ESAs), can be front-loaded for up to five years, and sometimes offer a break on state taxes. While not as flexible, they are superior to a UTMA or other taxable account due to protection from tax drag as the account grows and the tax-free withdrawals for educational purposes. As a general rule, the contribution limit is $15,000. However, there is nothing keeping your spouse, father, and mother from also opening 529 plans for your child. And they can all front-load five years’ worth of contributions to their account if they like. Every state has at least one 529 plan, and these plans compete for investor dollars across the country. This generally results in significant improvements over time as fees come down and investment options improve. 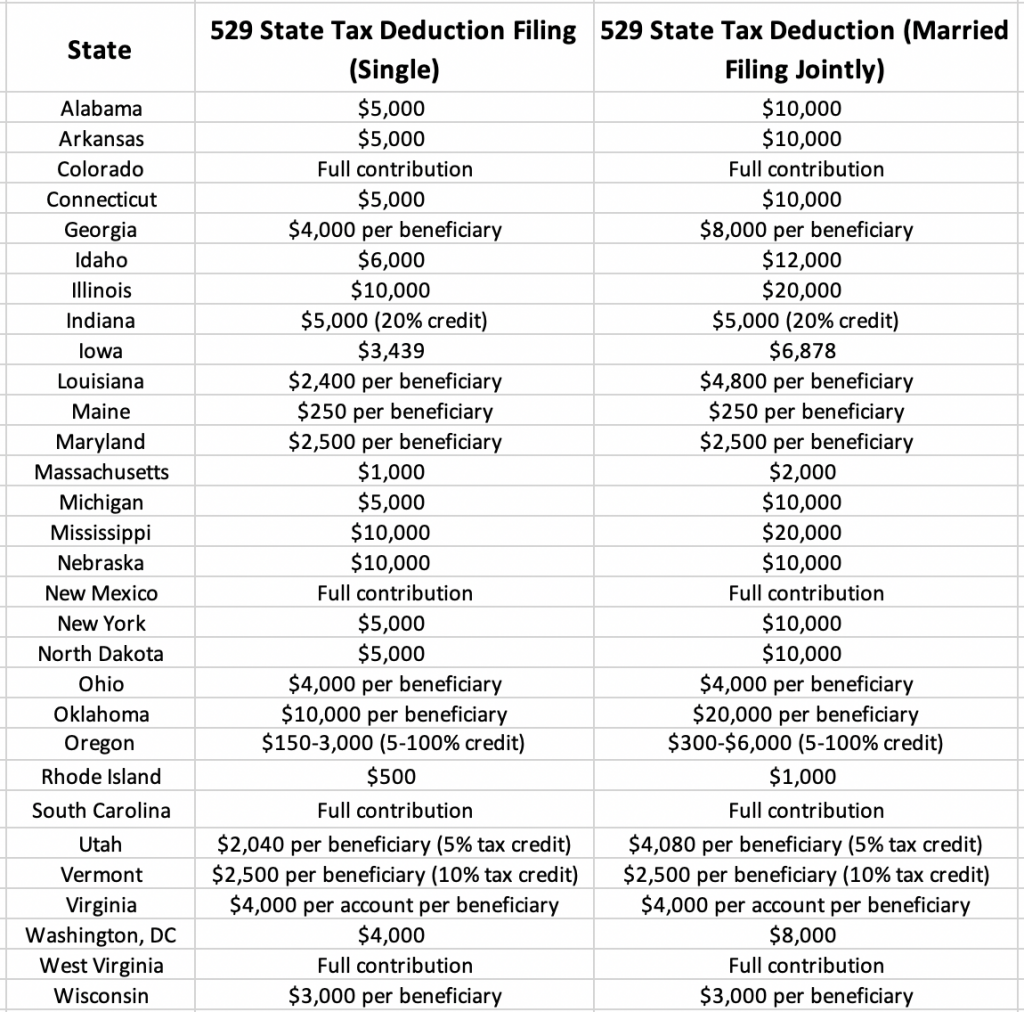 Note that the info in this chart is almost constantly changing. I had to update a half dozen of these the very day of publication and the laws of the various states will continue to change going forward, so if you see an error, please email us at [email protected] and we’ll fix it. Let’s spend just a minute on this chart. If you are located in one of these states, the best plan for you is your state plan, at least up to the maximum amount in the chart above. Except where specified “per beneficiary”, the amounts are per taxpayer. Virginia is an exception, where the deduction is per account. That’s right, savvy Virginians open multiple accounts for additional state tax deductions. Except where specified as a tax credit, it is a deduction, sometimes “above the line” and sometimes “below the line”. Note that at the time I made this chart, some states had not yet published the inflation-adjusted amount of their deduction or credit for 2021. For example, my state of Utah offered a 5% credit on the first $2,040 contributed in 2020. That amount should go up slightly for 2021. I’ll try to update those as I get the information.

Judged purely on the size of the deductions or credits, the most generous states appear to be Colorado, Illinois, Mississippi, Nebraska, New Mexico, Oklahoma, Pennsylvania, South Carolina, Virginia, and West Virginia.

Your state may not be in the list above. That is the case for one of three reasons:

If you are in one of the seven tax-free states, in one of the nine states that don’t offer a tax break, or in one of the two states that don’t care which plan you use, this section will be the most important one in this post. If you are in one of the other states, you should use your state plan at least up to the amount of the tax break. Unless your state plan is terrible, you should probably stick with it even for amounts above the tax break, just for the sake of simplicity. The most important difference between 529 plans is clearly the presence and amount of a state tax credit or deduction. There are fewer and fewer “bad 529s” each year, and in many cases, the states with a bad 529 (usually filled with broker-sold, high expense ratio loaded mutual funds) offer a second one direct to investors.

However, for those in the other 18 states, let’s list out the very best of the state 529 plans. For the most part, finding the best 529 plan for you should be based on fees and investment options. If a plan offers relatively low plan fees and a nice selection of low-cost index/passive funds from places like Vanguard and DFA, it is going to rank higher. The website usability, communication, and customer service is also going to vary, but those are much harder factors to weigh. I’ll make an occasional comment on them and leave it to readers to further comment on them in the comments section below the post. I am also going to ignore the “pre-paid college” plans. These vary by state, but are primarily designed to be used by those attending state institutions in their state. They are a subject for another post.

The top half of the plans in the table above are all very good plans. The bottom half are good plans, but not quite top-notch. I’m going to go through the top 12 of the best 529 plans and discuss them individually.

This was one of the bigger surprises of my review. This plan has made significant improvements (primarily lower costs) over the last few years and is now considered a top-rated plan by most. Costs are low, investments are good, the website is straightforward, and the investment oversight is top-notch.

This is the plan I use, and so do many people from out of state. They have been rated “Gold” by Morningstar for a decade. Expenses ratios are low and seem to get lower every year. Investment oversight is great. I even got the chief compliance officer to take a call from me on his cell phone in the evening. They made an upgrade to their website recently that I considered to be mostly a downgrade (thus the phone call), but they have plans to restore the information I was missing there (price per share info). There are both Vanguard and DFA funds, but what I like best about the Utah plan (aside from the tax break for us Utahns) is the ability to really customize your asset allocation.

Illinois has a perennially top-rated plan. My big beef with them is I think they actually offer so many options that it gets confusing. There are 11 different fund companies represented in their line-up. However, there are plenty of good ones and it is easy to keep expenses low. I’ll be honest though, when I think of state governments that I trust, Illinois does not spring to mind as being at the top of the list.

Like many states, New York has both a direct and an advisor-sold plan. Make sure you’re in the right one! The direct plan is frequently in the top five lists of savvy investors. I love that it is straightforward and low cost. You don’t quite have the flexibility you get in the Utah plan, but you generally save a few basis points in expenses.

California has also been in and out of the top five over the years. Expenses have always been quite low. I ding them for not having Vanguard funds and for having so many active funds available.

Here’s another big surprise from my research. This plan does not get the credit it deserves for out of state investors. Good funds, low expenses, straightforward website. I wouldn’t be surprised to see people considering this one a top tier plan soon.

Nevada is another state with more than one 529 plan; make sure you pick the right one. This one, run by Vanguard, is often considered a top plan. The big advantage for out of state investors is that you can look at it while logged in to your regular Vanguard account, simplifying your financial chores. 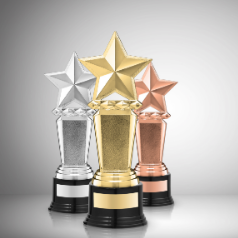 I have seen this one in top five lists before as well. I don’t think they’ve really changed anything, it’s just that the competition has gotten more fierce. Costs are low, just be careful because they use a few actively managed funds in there.

This is another plan many people don’t know about. This plan actually dropped a few Vanguard funds for DFA funds recently, but that’s probably a good thing since the dropped ones were actively managed. Overall expenses tend to be a notch higher than most of the plans above.

This one is not a bad little plan, filled with Vanguard funds and reasonable expenses. Probably not going to be on anybody’s top 5 list though.

Be careful in Virginia, they have a broker-sold 529, too, that is actually used by a lot of brokers. You don’t want that one. You might not want this one either. It was a favorite of Morningstar’s for a while, but they downgraded it recently as they changed their rating process. My biggest complaint is simply the sheer number of fund companies used. I like flexibility, but too much complexity is not helpful.

Again, beware the broker-sold option in this state. I’m not sure if this direct option is new or if Morningstar just missed it the last couple of years. It looks like a pretty decent plan and I wouldn’t be surprised to see it move up the rankings in the next few years.

I don’t see any reason for most to go much past #12 when trying to decide which 529 to use. But I’ll make a few comments about the others on the chart anyway. If you’re really careful, you can make really great use of the Massachusetts plan (or the New Hampshire plan, which could also go into the list above next to Massachusetts.)  They’re typical Fidelity—if you know where to look you can get the index funds with rock bottom costs, but they’re going to do everything they can to try to get you into the high expense actively managed funds. Most of the others are occasionally ranked highly by others, but I dislike the lack of Vanguard funds. I’ve never been very impressed with the T. Rowe Price plans. Some people seem to like the changes that Oregon has been making, but I found their site to be one of the most confusing out there. They recently changed from a deduction to a tax credit that will hurt high-earner residents, too. South Carolina doesn’t have the most straightforward website, but it could be a really good plan for a few of you….i.e. those who live in South Carolina. Nobody else is welcome. There are only about 3 or 4 plans that don’t want out of state investors, and South Carolina is one of them. I’ll leave it on the list for South Carolinians to include in their search.

The Best 529 Plans: The Bottom Line

Look to your state plan first to see if you are eligible for a tax break there. Otherwise, pick a plan out of the top ten above and go with it. Certainly, those who took my advice a few years ago and went with the Utah plan have had little reason to regret it. But there’s no reason to be dogmatic about it. Enough other 529s have lowered expenses that there are now lots of good options out there. By carefully selecting investment options at any of the top twelve you can keep your expenses low enough that they won’t be a significant drag on your returns.

What do you think? Which 529 plan do you use and why? Which would you use if you didn’t get a state tax deduction or credit? Comment below!

The FIRE Movement: How to Reach Financial Independence and Retire Early

How to Get Wealthy Investing in a Bear Market